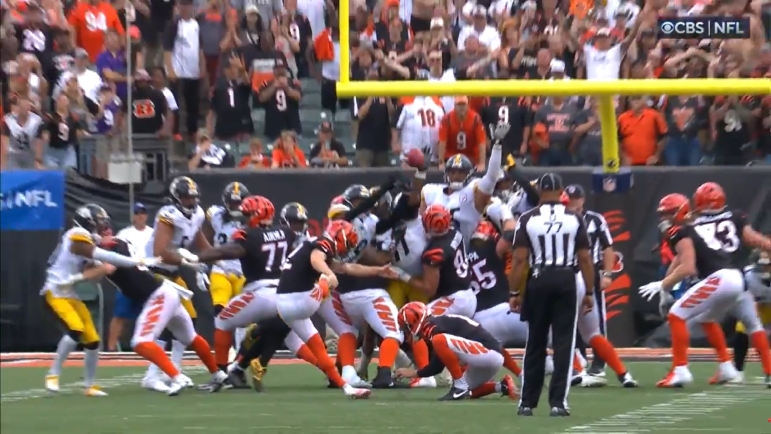 It’s easy to lose your place in the heat of the moment, especially when you just gave up a big play. That happened to Cameron Heyward on Sunday at the end of the fourth quarter. He thought the Cincinnati Bengals actually took the lead on wide receiver Ja’Marr Chase’s touchdown, as he told Rich Eisen yesterday. It took Danny Smith to remind him otherwise—and the special teams coordinator then quickly justified his otherwise academic correction.

“I thought they had won off of that. I didn’t even look at the score”, Heyward said of the 20-20 ball game that ultimately went into overtime. “So then our special teams coach came up to me and was just like, ‘Hey, we got one more play. They just tied the game’. I was like, ‘Okay, let’s see what happens’”.

You know, of course, what happened. Aided by a slight operational delay due to working with a backup long snapper, safety Minkah Fitzpatrick had just enough time to burst through the Bengals’ protection and get a finger or two on the football off the end of kicker Evan McPherson’s foot well enough to direct it out of the path of the goalposts.

In other words, the Bengals only scored six points in that sequence when they needed seven to take the lead and win the game. Instead, the two teams went into overtime, and by the waning seconds, it was Steelers kicker Chris Boswell sending the game winner through the uprights for the W.

“Yeah. I thought it was over. I was pretty pissed off”, he told Eisen again when he was asked if he really thought the Bengals had won on the Chase touchdown alone, which came with just two seconds remaining in regulation.

The two teams ultimately exchanged five drives in the 10-minute overtime period, using every second allotted to them, with three of them ending in a field goal attempt. The Steelers got the ball first and punted, with the Bengals reaching the Steelers’ 11 on their ensuing drive before a poor procedure to get the ball down for McPherson resulted in a shank.

Then it was Boswell’s turn, who ultimately clanged a would-be game winner off the left upright from 55 yards out with 2:22 to play. The Bengals eventually got down to the Steelers’ 38, from which distance they could have attempted a lengthy field goal, but a sack and strip by cornerback Arthur Maulet pushed the ball back to the 50 and forced a punt.

It then took the Steelers’ offense six plays to get from their own 20 to the Bengals’ 35 before attempting a 53-yard field goal with just five seconds remaining, which proved to be the final play of the game. It was either a Steelers’ win or, barring a blocked kick or a return by the Bengals, a tie.

We all know how that went, and fortunately for us all, Heyward was very mistaken about the score with two seconds left. And Danny Smith was justifiably confident in his unit, who delivered the game-saving play.