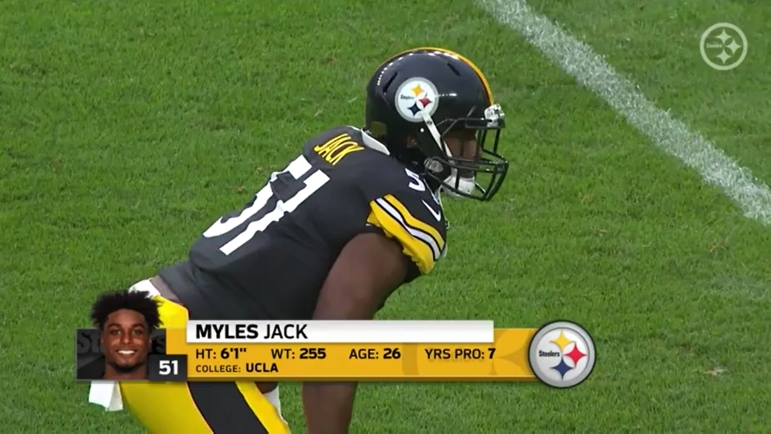 As an inside linebacker, your main job is to tackle the guy carrying the football.

Well, that is exactly what Myles Jack has done thus far in his brief time in a Pittsburgh Steelers uniform, ranking third in the NFL with 35 total stops though three games. Given the fact that Jack is currently averaging just under 12 tackles a game, could he realistically set the team’s single season tackle record?

If he keeps his current pace… absolutely.

According To Statmuse, James Farrior tops the list of single season tackle leaders in Pittsburgh with 141 total stops (96 solo) back in 2003. Jack through three games has 35 total tackles (19 solo), putting him on pace for nearly 198 total stops on the season. That would blow away Farrior’s mark and put Jack at fifth all-time in combined tackles in a single season, edging out former Lions standout Chris Spielman with 195 tackles back in 1994.

Myles Jack is the first Steelers player with 10 or more tackles in three consecutive games since James Farrior in 2008. #Steelers #NFL

While Jack has made it abundantly clear that he isn’t seeking to pad the stats and would rather stack up wins for the team, the reality is that Jack is the best player Pittsburgh has had at the position since they lost Ryan Shazier to a career-ending neck injury several years ago. Jack has been everything that Pittsburgh could have hoped for when they signed him, being that downhill player in the run game that also has the speed to run sideline-to-sideline in pursuit. He has fared well at taking on blocks and has represented himself well in coverage when asked to coverage running backs out of the backfield or tight ends.

It's routine but feels like a dang miracle in Pittsburgh. Linebacker taking on the block, shedding, making the tackle. Myles Jack a quality add. #Steelers pic.twitter.com/bik1a9yOAs

Hopefully, Jack’s tackle numbers drop in the coming weeks due to the defense playing less snaps and successfully getting off the field. Still, Pittsburgh would rather have a player like Jack leading the team in tackles than Minkah Fitzpatrick who held that honor last year as Pittsburgh was the worst rush defense in the league. While improvements still need to be made to shore up the run defense, small steps have been made to make this unit more respectable in 2022 than last season, and the addition of Jack has proven to be one of the team’s best signings to-date.

What are your thoughts on Myles Jack? Do you think that he could set the Steelers’ single season tackle record in 2022? Would you want him to set that mark, or prefer to see him in on less stops if it means less time the defense is on the field? Please leave your thoughts in the comments section below and thanks again for reading!