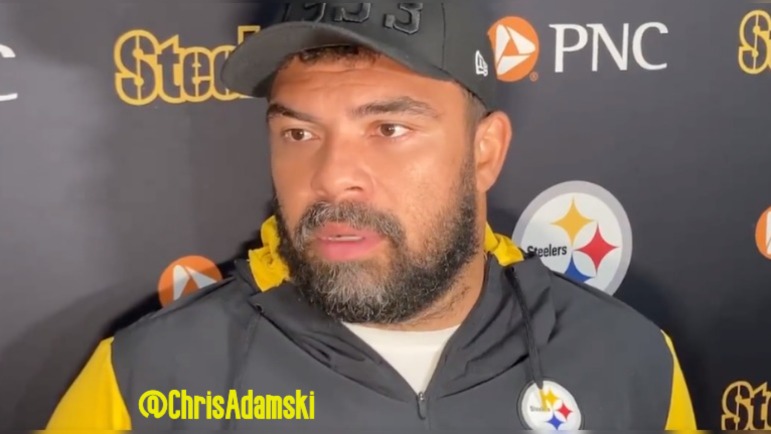 On Thursday prior to practice, DL Cam Heyward spoke to the media and gave his thoughts on the upcoming matchup with the New York Jets this coming Sunday. While Heyward recognizes that New York has some key injuries on offense, Pittsburgh’s defense can’t afford to overlook a team that has proven to give teams fits in recent weeks.

“They got two really good backs: Michael Carter and Breece Hall,” Heyward said about the Jets running game on Thursday, via video from Chris Adamski’s Twitter page. “I don’t know if it changes your game plan. They got some injuries upfront at the offensive tackle position, but to be young in this league, I don’t think you’re just going to sit back and let something happen. Zach Wilson is a guy who can do some things with his feet as well as throwing and we got to be ready for it all.”

Cam Heyward on respecting the Jets running game and on their rookie QB pic.twitter.com/AuQOMRb5tS

The Jets come into Week 4’s matchup with the Steelers hurting along the offensive front. OT Mekhi Becton fractured his right kneecap in the preseason and was placed on injured reserve, ending his season. New York went out and signed veteran OT Duane Brown in an attempt to replace Becton, but he too was placed on short-term IR with a shoulder injury prior to the start of the regular season, thus holding him out for this week’s matchup with Pittsburgh, with the soonest time he could return being Week 5.

George Fant, who has been starting at LT for the Jets, was just put on IR this week as well with a knee injury, prompting him to miss this week’s matchup with Pittsburgh. Currently, the Jets are expected to start Connor McDermott at LT and rookie Max Mitchell at RT along with Laken Tomlinson, Connor McGovern, and Alijah Vera-Tucker on the interior.

The Jets appear to be fine on the inside, as Vera-Tucker is one of the better up-and-coming guards in the league and Tomlinson has been known as quite the run blocker dating back to his days in San Francisco. However, Mitchell is unproven and raw as a fourth-round pick this past spring, and McDermott didn’t fare well in his limited action after Fant left the game.

Still, while New York may be hurting upfront, Heyward knows better than to overlook the competition given the fact that the duo of Carter and Hall have been efficient in the ground game and productive pass-catchers out of the backfield. Wilson is coming back from injury and making his season debut against Pittsburgh this week, but he brings far more mobility to the QB position than what Joe Flacco has at this stage of his career.

In the NFL, you can’t afford to overlook any one opponent as you can find yourself losing on any given Sunday. The Browns experienced this against the Jets in Week 2 as New York came from behind to get the win. Pittsburgh will try to avoid overlooking New York this Sunday at home as it attempts to bottle up the run and put the pressure on a young Zach Wilson in his first game back, with his starting OTs out, to try and beat them as they dial up the pass rush.