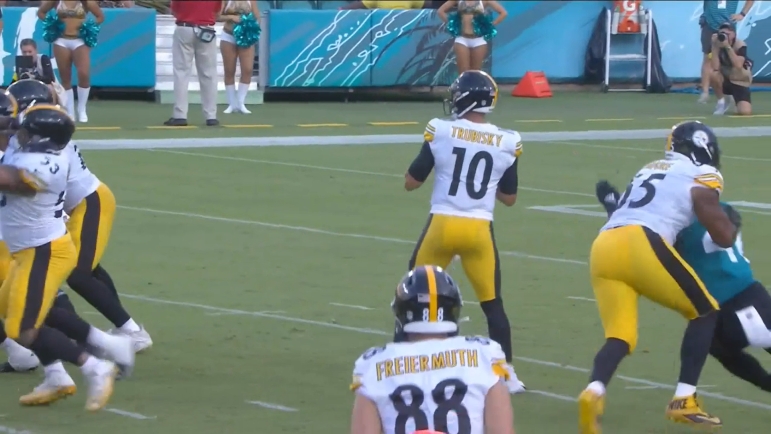 Topic Statement: Dan Moore Jr. will be benched before the season is over.

Explanation: The Steelers know that their offensive line remains a work in progress, certainly with respect to the performance of the overall group, but perhaps there is even room for a discussion about personnel, should it become necessary. Of the five projected starters, left tackle Dan Moore Jr. has certainly struggled the most.

Anybody who plays bad enough risks getting benched, and if Dan Moore Jr. continues to play to the level that he had throughout the preseason, he is heading in that direction. After showing some general improvement over the course of his rookie season, having been thrown into the fire, he seems only to have regressed.

Given that the Steelers have a couple of new quarterbacks, and potentially a new future franchise quarterback on the roster, protecting the blindside is going to be of the utmost importance. It will only be a matter of time before they reach the tipping point and have to figure out a way to make the change for the sake of putting together a coherent offense.

Well, part of the issue of benching Moore is that there has to be an alternative option, and there really isn’t a good one. One option would be to start Trent Scott, and there are no indications that would be better. Nor should Jesse Davis be expected to be an upgrade.

The more realistic possibility is the one the coaching staff would be most resistant to, as it would involve moving Chukwuma Okorafor from right tackle to the left side. Okorafor did prepare to start at left tackle all offseason last year, even if they had to make a change of plans.

Oh, yeah, and there’s also the possibility that Moore does get better from what we’ve seen thus far. The group as a whole has had some issues in terms of adjusting to a new set of techniques and concepts under Pat Meyer. That’s going to take time to work its way into coherence.