The 2022 NFL season is finally here as it kicks off Thursday night with the Los Angeles Rams hosting the Buffalo Bills on NBC. As I do every year at this same time, below are my final regular season records and playoff predictions for the upcoming season. But first, have a little fun by looking at my predictions from last season at this same time.

Overall, not awful, I suppose. I had nine of the 14 teams that made the playoffs correct and five of the seven AFC teams. I wasn’t close on the Super Bowl, however, as I had the Bills beating the Tampa Bay Buccaneers in the big game.

So, what do I think about the 2022 Pittsburgh Steelers? Well, I am not bullish on them at all, and I bet you smelled that one coming for a while. I think that their newness at the quarterback position, along with their poorly built offensive line, is going to result in the team needing strong defensive and special teams play throughout the season just to stay in games. While I do believe that the Steelers 2022 defense will be better overall than the 2021 unit was, I still don’t think that side of the football will be as elite as many others are speculating.

While former Steelers quarterback Ben Roethlisberger was obviously past his prime in 2021, he still managed to help win a few games thanks to some nice fourth quarter efforts. That part of Roethlisberger’s game will likely be missed in 2022 as Mitch Trubisky will need to show me that he can win some games late and likely sooner rather than later. Perhaps starting even in Week 1 against the Bengals in Cincinnati. At some point during the 2022 season, I expect rookie quarterback Kenny Pickett to take over for Trubisky as the team’s starter. The Steelers offense struggled to run the football and create explosive plays in 2021 and while I do think both phases might improve in 2022, I’m not sure it will improve near enough.

I think that Steelers head coach Mike Tomlin is good for about 1.65 wins a season. Even so, I struggled to make myself give the Steelers nine wins in 2022. That felt too generous, even though 9-8 has been in my head all summer. So, my extreme objectivity and knowledge of the team lead to me predicting an 8-9 record for 2022. I do believe that is the first time in the history of the site that I have had them below .500. I do think the max win total for the 2022 Steelers could be 10 but that’s only if they steal a few extra games, which I just can’t see happening. 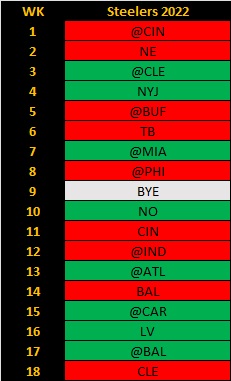 Obviously, I have the Steelers missing the playoffs in 2022 and that’s a rarity for me as well. I think the Steelers’ Super Bowl window will potentially open back up in 2023 and that’s if Pickett gets to play some in 2022 and the offensive line is added to again next offseason. In the meantime, it could be a long 2022 season for fans of the Steelers.

I will not bore with a long out explanation about my 2022 picks, but I do feel confident when it comes to the AFC division winners. I have the Bills winning the East, the Cincinnati Bengals winning the North, the Kanas City Chiefs winning the West and the Tennessee Titans winning the South. I have the Baltimore Ravens, New England Patriots and Los Angeles Chargers earning the three Wild Card spots in 2022.

As for the NFC, I have the seven teams coming out of that conference as the Rams, Buccaneers, Green Bay Packers, Philadelphia Eagles, Washington Commanders, Minnesota Vikings, and the Arizona Cardinals.

After the dust settles, I have the Bills beating the Rams in Super Bowl LVII. That game would of course be a rematch of the game we’ll see Thursday night to open the 2022 regular season.

Enjoy the 2022 season and feel free to leave your hate comments below.