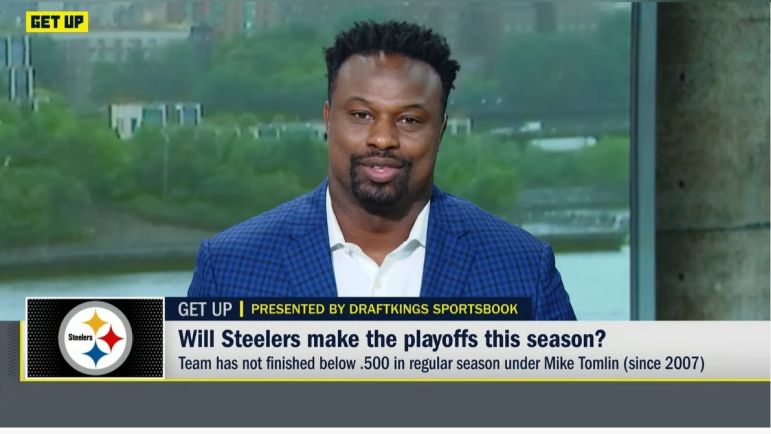 Earlier, we offered the optimistic view of the Pittsburgh Steelers’ 2022 season, with NFL Network’s Kyle Brandt believing the Steelers will make the playoffs. Bart Scott doesn’t paint the same picture, taking the other side of the coin and predicting not only will Pittsburgh miss postseason action, Mike Tomlin could finish below .500 for the first time in his career.

Scott joined a panel on ESPN’s Get Up to discuss Pittsburgh’s odds.

“I don’t think this is a playoff team,” he said. “This could be Mike Tomlin’s first losing season. Now he’s one of the best coaches in the business and I love him to death. I love the way he goes about his business. He always holds his players accountable. But the issue is the AFC and just all the star power. The young star power for the future and beyond is in the AFC.”

The Steelers are arguably in the NFL’s second-toughest decision, only trailing the AFC West, with the Baltimore Ravens, Cincinnati Bengals, and Cleveland Browns. Three of the game’s top quarterbacks make up the division in Lamar Jackson, Joe Burrow, and Deshaun Watson. Of course, Watson won’t be available until late in the year, but Pittsburgh will have to face him once in the Week 18 finale; as last year showed, that’s a game that could mean everything to the Steelers. The Bengals are coming off a year in which they swept the Steelers for the first time since 2009 and Pittsburgh’s dropped three straight games against them for the first time since 1989-1990. Baltimore will be a tougher out this year, still leading the division entering the final quarter of last season before losing Lamar Jackson to a high ankle sprain and tanking the rest of the way. If they can be 50% healthier than they were a year ago, they’ll squarely be in the postseason mix.

Scott said quarterback play will be the difference maker for which teams advance to the playoffs and which watch them from home.

“The young star power for the future and beyond is in the AFC. If you don’t have an above average quarterback, that can be a plus multiplier for the players around him, you don’t have a shot in this division. I don’t think you have an opportunity to just kind of sneak your way in being an okay quarterback and running the ball and playing solid defense and trying to ugly it up.”

Zooming out at the AFC for other potential Wild Card teams Pittsburgh may compete with, the West is loaded with Patrick Mahomes, Russell Wilson, Justin Herbert, and Derek Carr. Not a bad quarterback in that bunch. The Colts upgraded from Carson Wentz by acquiring Matt Ryan while young arms in the AFC East like Mac Jones, Zach Wilson, Trevor Lawrence, and Tua Tagovailoa could take steps forward this season. Pittsburgh will roll into the season with Mitch Trubisky, whose had a reasonably good summer, but the lack of firepower under center certainly could be something that holds the Steelers back.

While Scott’s allegiance to the Ravens may make him a little biased, his overall point isn’t wrong. It’s a quarterback-driven league and there may have never been a time in history where the AFC was as loaded as they are entering 2022. That puts Pittsburgh behind the eight ball and they’ll have to, as Scott termed it, “ugly it up” to have a chance.