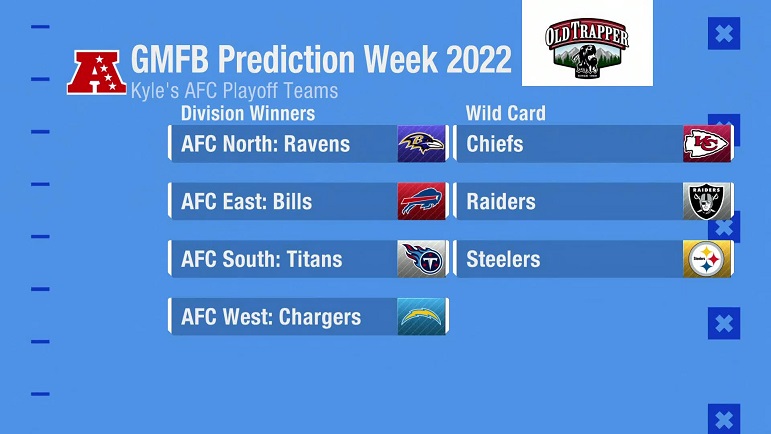 In picking the AFC playoff teams Tuesday morning, NFL Network’s Kyle Brandt didn’t predict the Pittsburgh Steelers would take the AFC North crown. But he does believe Pittsburgh will find a way to make the playoffs, sneaking in as the seventh and final Wild Card seed. Brandt explained his rationale and why he has the Steelers advancing to the postseason.

“You will never see me turn my back on them,” Brandt said.

Ok, it wasn’t much of an explanation and more of a gut feeling about the Steelers’ chances. One he’s apparently had for quite some time, believing Pittsburgh is playoff bound for several months.

"I decided that months ago." — @KyleBrandt, on having the @steelers as one of his AFC playoff teams pic.twitter.com/GdPa9N7y8U

Brandt is likely going off history and the Steelers resiliency to make the playoffs even against all odds. 2021 is a great example. Pittsburgh got off to a terrible start, 1-3 through the first quarter of the season. Historically, their playoff chances looked bleak, and by the start of December, they still sat at 5-5-1 in a competitive AFC North. By Christmas, they were 7-7-1 with the playoff light about to turn off. But they rallied and won the final two regular season games over the Cleveland Browns and Baltimore Ravens.

With some help from the Jacksonville Jaguars upsetting the Indianapolis Colts and the Las Vegas Raiders and Los Angeles Chargers narrowly avoiding a tie, Pittsburgh got into the playoffs as the seventh seed. They were promptly blown out by the Kansas City Chiefs the following week, but it was a playoff appearance all the same.

Making it back to the postseason this season would generally be viewed as a successful season. With an uncertain offensive line and quarterback situation, few are doing what Brandt did. But the Steelers are searching for a playoff victory, something that hasn’t happened since 2016. It’s the team’s longest playoff drought in over 50 years.

Around the North, Brandt is picking the Baltimore Ravens to take the division, bouncing back after missing the playoffs a year ago. Curiously, he doesn’t have the Cincinnati Bengals making it back to the postseason after winning the AFC last year. Instead, his Wild Card teams are two teams from the AFC West, the Kansas City Chiefs and Las Vegas Raiders.