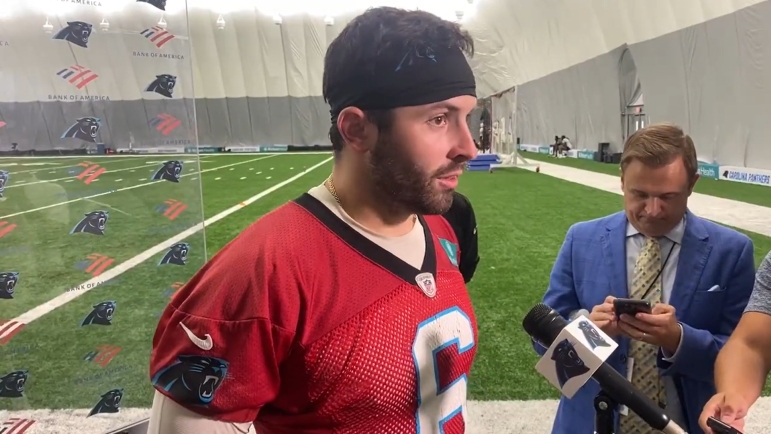 There are certainly other things we could be talking about right now, but since it does pertain to the Pittsburgh Steelers’ divisional rivals, and it contradicts what was previously stated—and what I have previously participated in proliferating—it is worth addressing.

According to NFL reporter Cynthia Frelund, during the course of a friendly exchange that he had with the quarterback during which she wished him success on the season and perhaps used some colorful language, she retold a story in which the conversation ended with Mayfield agreeing with her expression of his intention to take it to his former team, the Cleveland Browns, saying, “I’m gonna fuck them up”.

Frelund, when pressed, did herself confirm that, in her experience, this was a direct quote from Mayfield. The quarterback, however, who is preparing to face his former team now as the starter for the Carolina Panthers, addressed the matter yesterday and claims to have never said it.

There was no physical video evidence of Mayfield saying the phrase in question, the only support being Frelund’s own words—and she only intended it as a playful anecdote to support Mayfield’s own statements in the past that playing his former team does mean more to him than any other game.

“Well, first, I didn’t say it”, Mayfield told reporters yesterday when he was asked how close to the sentiment he felt relative to the quote that Frelund put out there, via Joe Person of The Athletic.

Baker Mayfield said he didn’t say what he was alleged to about effing up the Browns. pic.twitter.com/rtIcxeVH3H

“Obviously, everyone’s gonna write whatever story they want. There’s history that I’ve played there the last four years. I’m an extremely competitive person. Everybody knows that. If I wasn’t wanting to win, there would be a really big issue of me being the quarterback here. I want to win in everything I do. That’ll never change. That is not how I phrased it—that is not even what I said—so I’ll just leave it at that”.

Now, what exactly does he mean when he says “that’s not how I phrased it”? That certainly seems to suggest that there is something that he said that is in the same spirit as what he was quoted as saying. But whether he said anything like that or not, everybody knows that he thinks it.

And it’s entirely reasonable and justifiable for him to feel that way. The manner in which his relationship with the Browns first soured and then ended was very public, including anonymous leaks that insulted his character, purportedly within the organization, which prompted him to request a trade.

He’s already said that this game means more to him. He’s acknowledged that. It really, ultimately, doesn’t matter if he actually said the exact words he was quoted as saying, because—not only is it in itself unimportant—it’s also self-evident that he does, and would, and perhaps even should feel that way about this game. But because he now went on record as stating that that specific phrase is not what he said (he acknowledged that he had an informal conversation with Frelund in which they discussed his upcoming season), it merits passing along, especially in light of the fact that we covered it yesterday, to have his side on record.

You can deem it unimportant, and I wouldn’t disagree with you, but there it is. But I reiterate the sentiment that I expressed yesterday—that I hope he does what Frelund says he told her he would do to the Browns.