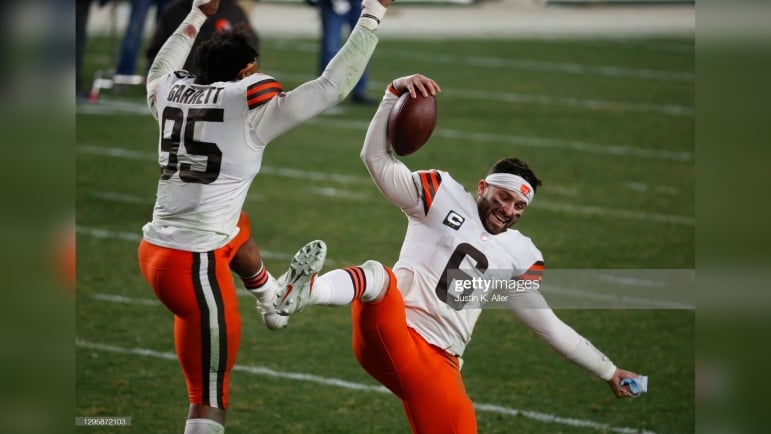 The Cleveland Browns drafted quarterback Baker Mayfield with the first overall pick in the 2018 NFL Draft. Then they unceremoniously turned their back on him this offseason and signed an accused sexual predator who will miss the first 11 games of the season because of it, because he made a couple of Pro Bowls.

They eventually dealt Mayfield to the Carolina Panthers for a late-round draft pick. He won the starting job there. And the Panthers will play the Browns. Soon. As in on opening day. Mayfield will host his former team the next time he takes the field. And that matters to him. He’s spoken about it before.

And ahead of the Panthers’ final preseason game, he talked informally to NFL reporter Cynthia Frelund. In the course of congratulating him and wishing him a good season, including a good game against a former team, Mayfield told her, half-jokingly, “I’m gonna fuck them up”.

You would have known where this was going even if you somehow came in here without reading the headline. That quote went everywhere, including into the Browns’ locker room, where it has now become bulletin board material for the likes of Myles Garrett, who perhaps still has the paper shredder he used to shred a picture of Ben Roethlisberger, and is now doing the same to a picture of Mayfield.

“Talking like that and moving the way he does, it’s worked for him. He uses that for fire, for motivation and I think speaking like that helps amp him up”, Garrett said, in a remark that clearly indicates it’s not about ill will and understands where his former teammate is coming from.

Yet at the same time, he added, “It does the same for us as well. We’ll take it and we’ll use it, and I’m hoping for a great matchup. I don’t think any less of him because he’s going out there and doing the same thing he did when he was with us. He’s the same guy personally, and maybe we’ll see a different Baker when we get on the field. Who knows?”.

While there had been reports—unsubstantiated as far as I know—that some of Mayfield’s behavior had divided the locker room, I don’t think there is any doubt that the issues between the quarterback and his former team are rooted in the ownership and the coaching staff who dumped him off for, at least in the eyes of the NFL, a sex offender.

It should be fun, at least, to see him go up against his former team, and as a clearly unbiased observer, I am truly hoping that he does fuck them up—and also that he very much fails to do the same when it comes time for him to play the Steelers again.