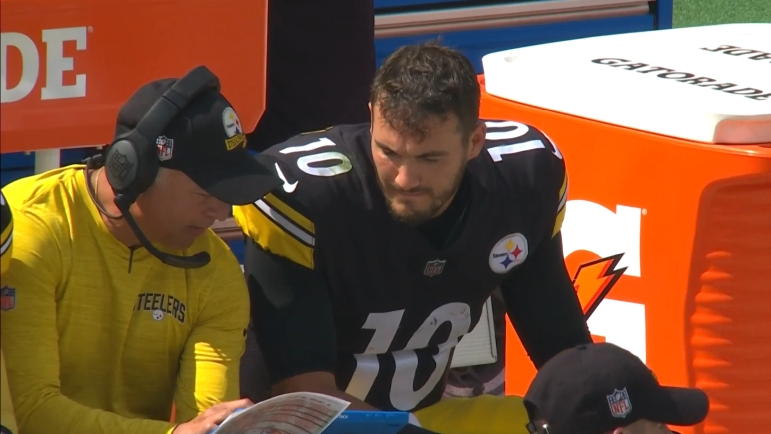 Reasoning: The sixth-year veteran quarterback is two games into his starting tenure for the Pittsburgh Steelers and already has the fans restless for Kenny Pickett. While that was inevitable to some degree, his overall performance is not having many people clamoring for him to go the distance this season.

Let’s just start with the very basics. Through two games, Trubisky has completed 42 out of 71 pass attempts for 362 yards and two touchdowns with one interception. He has led only two touchdown drives, and the offense has only produced 30 points.

He ranks 29th in per-game passing yardage, 23rd in completion percentage, tied for 18th in touchdowns, and 32nd in passing yards per attempt. Bottom line, his numbers pretty much across the board rank in the bottom third of the league. Some quarterbacks have had better halves than he has had on the season thus far.

More importantly, we need to look at the plays themselves, and again, we’ll start with the simplest diagnosis—he’s responsible for a lot of his own pressure, particularly his sacks. While he’s taken the blame for the sacks already, his reads and movement in the pocket have also opened pressures that he owns the blame for as well rather than the line.

My biggest concern from watching Trubisky in the season, however, was the fact that he wasn’t hitting open reads, and that’s unfortunately still an issue. Alex Kozora is going to have an article today pointing out a key play where he missed an obvious read on a crucial down, the kind that veteran quarterbacks just have to see and hit. And it’s just one example.

I just don’t see this getting better over time. He’s at a point in his career where he shouldn’t need to be on a learning curve when it comes to knowing how to survey the field. Is it possible that he starts missing fewer reads? Maybe after a year out of the lineup, he’s still getting his feet back under him and he really did grow during his time in Buffalo? We can only hope, but I wouldn’t consider myself an optimist on this one.

Make no mistake, Trubisky is far from the only issue on the offense. But things would be going better if he were playing better. If he were simply making the reads that he’s supposed to be making and then delivering the passes he’s supposed to deliver. This isn’t asking for anything spectacular. It’s the basics.