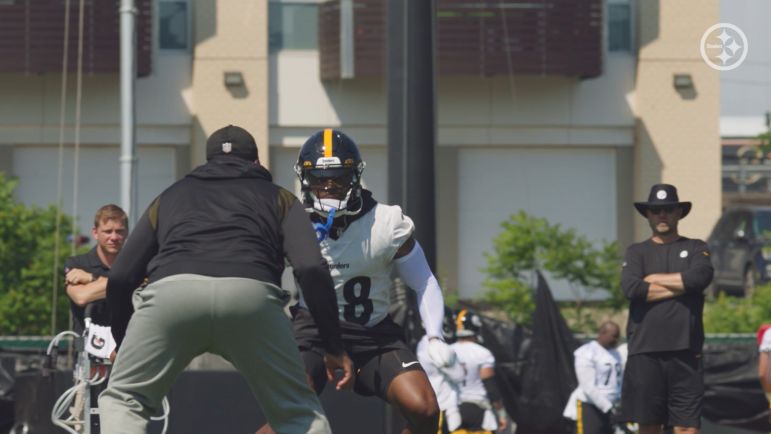 It’s great when two stories come together. Earlier this week, we wrote about new WR Coach Frisman Jackson’s emphasis on run blocking, one of many weaknesses along the Steelers’ offense last year. Speaking to reporters after today’s practice, rookie WR Calvin Austin III confirmed how much time Jackson is dedicating to blocking.

“Really the biggest thing he’s on is our blocking in the run game,” he said via Steelers.com. “That’s something that I’m constantly trying to work on and improve on.”

It echoes what we’ve observed at training camp. Run blocking is a component of every training camp practice, even under previous WRs Coach Ike Hilliard. But Jackson has done more work there than any coach I’ve seen. Here’s what we recently wrote.

“More than ever, Jackson has the receivers working on run blocking during their positional/individual drills…Jackson’s taken it to another level. Earlier in the week, the receivers hit the blocking sled, a drill normally conducted by the tight ends. But each receiver, from George Pickens to Tyler Snead, received a rep.”

Pittsburgh’s run game was inefficient a year ago for a variety of reasons, and poor downfield blocking from receivers was one of those issues. Jackson seems hell-bent on changing that and has two great body types to block in Chase Claypool and George Pickens. But blocking is largely about effort, and even small guys like Diontae Johnson, Calvin Austin, and a rookie like Tyler Snead, all 5’6″, 172 of him, need to do it. Snead proved size doesn’t matter, pancaking CB Chris Steele in a stalk block drill earlier this week. Last season, Ray-Ray McCloud made impact plays as a blocker and was arguably their best one at it largely due to his effort. Pittsburgh had a great run blocker in the slot in JuJu Smith-Schuster and now will try to fill that spot with Claypool. But Austin will need to step up when he plays inside, too.

Austin said Jackson makes sure the receiver room is being consistent with their blocking.

“He’s one of the biggest ones where you can’t take any plays off.”

Case in point. Pickens showed subpar effort earlier in the week. Jackson got on him about it and Pickens improved, having a great blocking day the following practice. Unless your name is Hines Ward, receivers generally don’t like blocking. It doesn’t get them paid and no receiver wants to jam a finger inside some cornerback’s chestplate. But the Steelers’ offense will revolve around the run game, one that needs splashier outcomes than a year ago, so receivers need to get involved. That part of their job description isn’t optional. Jackson’s made the group well aware of that fact.