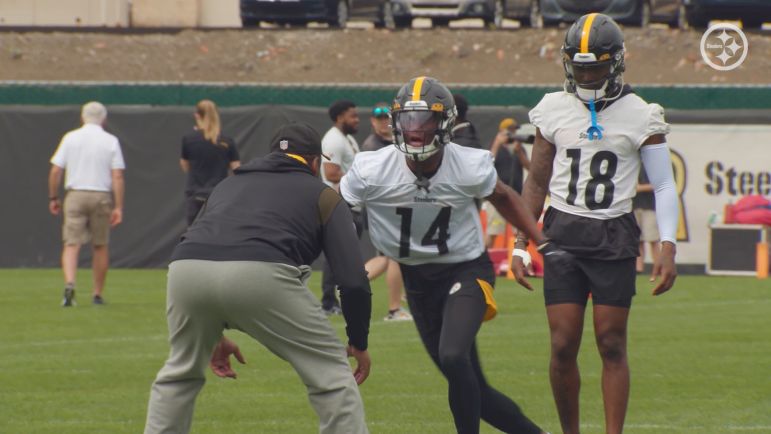 What Alfredo Roberts was to the tight end room last year, new WRs Coach Frisman Jackson might be to the Pittsburgh Steelers’ receivers this season. Jackson replaced Ike Hilliard, not brought back after two years with the team, and brought a blend of recent college and pro experience. Each coach has their own flare, own style, even if the overall structure is the same. Though Jackson wasn’t with the team last year, he’s aware of one of the room’s most underrated issues. Blocking.

Wide receiver blocking is lower on the list of things you look for out of a group. But coaches don’t pick and choose and rank. It’s all important to them. It makes up one part of the complete job description. As our own Tyler Wise pointed out time and time again last year, Pittsburgh’s wide receiver blocking was…lackluster, if we’re being kind, and actively hurt an already hamstrung run game. Here’s just one such example Wise pointed out, a lack of effort from Claypool that could’ve extended this Najee Harris run.

One play to sum up the general theme of last year’s issues. By nature, Harris isn’t an explosive runner and the Steelers’ offensive line was largely a mess. Perimeter blocking from the receivers are often the difference between a good and great run and they did Harris nor the line any favors.

It’s obvious Jackson’s taken notice of the problem. Now he’s trying to solve it. More than ever, Jackson has the receivers working on run blocking during their positional/individual drills. Seeing a stalk block drill at camp isn’t new – that’s done every single year. But Jackson’s taken it to another level. Earlier in the week, the receivers hit the blocking sled, a drill normally conducted by the tight ends. But each receiver, from George Pickens to Tyler Snead, received a rep.

Usually see the tight ends on the blocking sled. But Frisman Jackson putting the WRs through it too. Here's George Pickens. Gotta have better WR blocking for the run game this year. #Steelers pic.twitter.com/ZvAMQZzRtl

But that’s not the only example. They’ve done bag drills with receivers “blocking” Jackson and assistant coach Blaine Stewart. Of course, they did the stalk block drill earlier this week on Tuesday, one on one with CBs trying to block/defeat the block as a receiver runs past. The receivers did well, even the tiny Tyler Snead, who put Chris Steele on the ground one rep. Separately, Jackson got on Pickens’ case one day earlier in the week for a perceived lack of effort as a blocker. Pickens responded the next day with better results.

Like Roberts had in the tight end room last year with Pat Freiermuth and Zach Gentry, this is a young group of receivers. Chase Claypool still in his third year with a pair of rookies in George Pickens and Calvin Austin III, two guys, especially Pickens, who could be counted on quite a bit. Jackson’s task is to grow this group up, and fast, all while the Steelers adjust to their first QB chance in nearly two decades. But for this offense and for this team to succeed, they’ll have to greatly improve their run game. At the least, their WR blocking should be better than where it was a year ago.