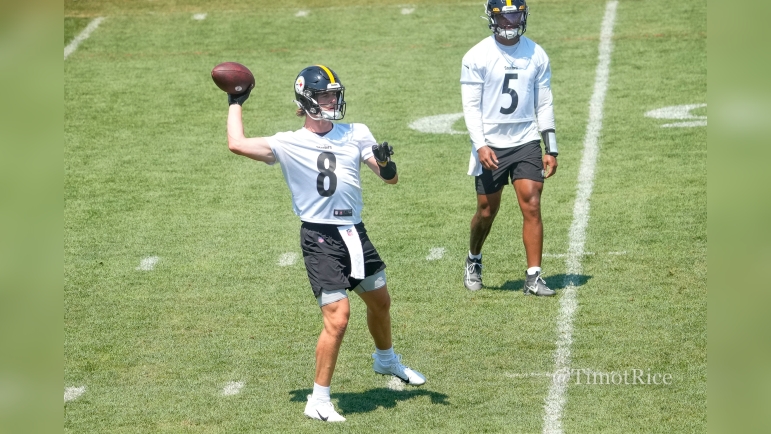 It can be pretty difficult for a rookie in the NFL jumping right into his first-ever training camp with a chance to win a starting job right away, especially at the quarterback position. So far, that’s exactly what new Pittsburgh Steelers quarterback Kenny Pickett finds himself attempting to do.

Unlike some other young quarterbacks in recent years though, Pickett finds himself going up against one of the very best defenses in football each and every day at Saint Vincent College in Latrobe, making his transition to the NFL a rather difficult one.

Starting cornerback Ahkello Witherspoon, appearing on the 102.5 WDVE morning show Friday, believes that Pickett has the right mental outlook though, which has helped him settle in nicely in the last week or show, showing improvement each and every day in training camp.

“I think he’s done well. I think he’s improving, and that’s all you want to see for a rookie,” Witherspoon said to the 102.5 WDVE morning show Friday, according to audio via iHeart Radio. “He’s going against a high-level defense every day. We have a lot of different looks, so I’m just excited for him and his growth and he seems like he has the right mentality to keep persevering and pushing through and keeping improving.”

We've talked about Kenny Pickett's progression Week 1 to Week 2. Here's what that looks like.

Clear improvement across the board. #Steelers

Pickett has certainly improved each and every day, and has pushed through some early-camp struggles, which were not unexpected at all. Now though, with more than a full week behind him and entering his second full week of padded practices Monday afternoon at Latrobe Memorial Stadium, Pickett is starting to find a groove and really making a push to be in the discussion for the starting job in the three-man quarterback competition featuring Mitch Trubisky and Mason Rudolph.

According to Alex Kozora’s stats from training camp, Pickett was right there neck-and-neck with Trubisky in practices 5-8, completing 25-of-35 passes for 170 yards, three touchdowns and no interceptions, including a 6.8 yards per completion number. He did that in just 61 reps, compared to the 80 that Trubisky received in the same span.

Kenny Pickett on camp so far: "Being able to play with these guys for a little bit, I thought it was a lot cleaner this week. Being able to play at a much higher level. I definitely feel good going into week three." #Steelers #NFL

Though the yards per completion numbers are a bit concerning overall as Pickett seems to be checking down and throwing short often, he’s starting to settle in overall and has made some great throws in recent days at camp, including ones to Cody White and Calvin Austin III for scores.

Overall, Pickett’s numbers throughout training camp are relatively average. To date, Pickett is 38-for-61 in training camp for 225 yards, four touchdowns and two interceptions. According to Kozora’s stats, Pickett has the lowest yards per attempt number (3.7 YPA) in camp among the three quarterbacks.

He has the fewest reps among the three with just 110, but he’s slowly getting there, which is expected of a quarterback of Pickett’s stature once he settles in and really gets into a flow, which is certainly happening right now for the first-round quarterback.