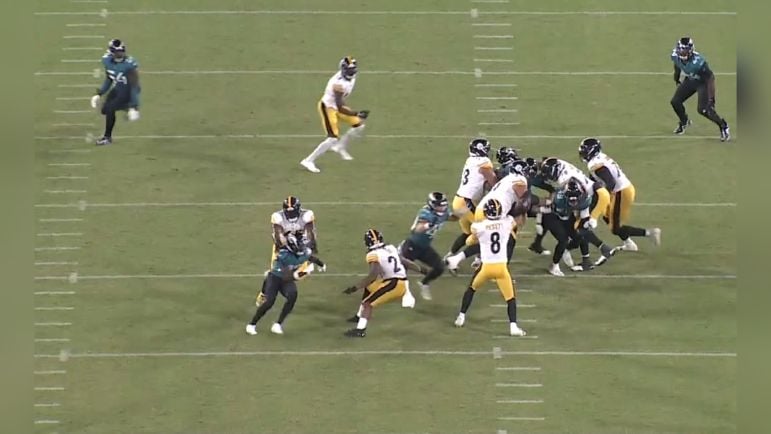 The elephant in the room is that the Pittsburgh Steelers’ offensive line in the struggle. To the point where a literal elephant in the room would probably block more effectively. And though he declined to go into details, Mike Tomlin gave a brief overview of what that group played so poorly, leading Tomlin to put guys like Kendrick Green in the front of the class. That’s according to Jeff Hathhorn, who tweeted out some of what Tomlin said following Monday’s practice.

“There wasn’t enough detail from a fine motor skill standpoint, details relative to their position,” Tomlin said via Hathhorn. “They didn’t play with enough of an edge individually and collectively, and the things that are on our tape, we gotta own and I think they’ll be ready to do that.”

Starting quarterback Mitch Trubisky was under siege on nearly all of his dropbacks while Kenny Pickett had to throw under duress during his two-minute drive. Officially, Steelers’ quarterbacks were sacked once and hit only four times, but those numbers don’t tell the story and paint a rosier picture than what happened in Saturday’s win over the Jacksonville Jaguars.

Pittsburgh has their third offensive line coach in three years, Pat Meyer taking over for Adrian Klemm, who bolted to Oregon before last season even wrapped up. And it’s clear they’re uncomfortable with Meyer’s new system and teachings, though Tomlin declined to give any specifics. Luckily, we have a good feel for what Meyer is looking for in pass protection. Tomorrow, we’ll share a deep dive into what Meyer teaches and how the Steelers are struggling to trust their technique or flat out not executing it.

The Steelers’ top two offensive linemen this year have been center Mason Cole and right tackle Chukwuma Okorafor. Left tackle Dan Moore Jr. hasn’t made a second-year jump while the left guard battle has been an ugly one between Kevin Dotson and Kendrick Green. Dotson appears to be a better system fit but neither have separated themselves in a positive way. Right guard James Daniels has been the biggest disappointment and looks flat out uncomfortable applying Meyer’s new teachings.

Pittsburgh has tried to revamp their offensive line for the past two offseasons and haven’t had an at least serviceable group since 2019. With an offense built around ball-control and staying on schedule, they’ll at least need the starting five to become decent run blockers. But at this point, even getting to that point seems like climbing a mountain and the season begins just three weeks away.

The only silver lining is Pittsburgh should get more comfortable with time, reps, and learning from mistakes. These are the pitfalls of needing to re-tool an offensive line year after year with a new coach with his own spin on things. Now the Steelers are paying the price.

#Steelers Mike Tomlin after watching tape and what he said to the offensive line ⁦@937theFan⁩ pic.twitter.com/RRvEIzqnWI