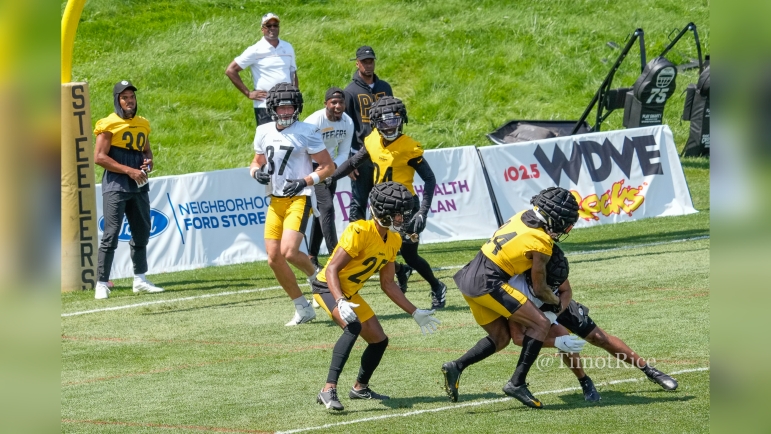 Could multi-year starting safety Terrell Edmunds be replaced in the Pittsburgh Steelers’ starting line-up in 2022? How about cornerback Cameron Sutton assuming a new role? New defensive coordinator and former secondary coach Teryl Austin delved into the competition for starting jobs in the secondary in a recent interview.

In a Wednesday interview with 93.7 the Fan’s Jeff Hathhorn Thursday morning, Austin was asked about the role of free agent signee safety Damontae Kazee, as well as the competition at the cornerback position.

“He’s been a starter in this league. So, it doesn’t surprise me that he shows up the way he does,” Austin stated regarding Kazee. “I think once Minkah [Fitzpatrick] gets back, that stuff will sort itself out. It’ll give us some flexibility to use some different packages and different guys. You know, the way he’s trending right now, he’s obviously deserving of an opportunity to get on that field and help us.”

While this answer does not explicitly refer to Edmunds’ role being in jeopardy, one has to wonder whether he is. A former first-round pick, Edmunds has played nearly every snap for the Steelers at the strong safety position since entering the league in 2018. Granted, that type of endurance is extraordinary in the NFL, and Edmunds recently received the praise of head coach Mike Tomlin for his “ridiculous availability.” That said, Edmunds’ play has left a bit to be desired. While by no means an awful player, his lack of playmaking to date has left many wondering whether the first-round pick investment was worth it. Given that Edmunds was signed to a one-year deal this past offseason, a benching or reduced role is certainly plausible. A multi-year starting safety, Kazee is certainly positioned well to challenge for Edmunds’ role, and it appears that Austin is more than familiar with his play.

“Levi [Wallace]’s been down. He’s missed a few days, but we’ll let that competition play itself out. But I think no matter who we have in there, we have another guy [Ahkello Witherspoon] that came here, has starting experience, has played on really good defenses. So, he knows what it takes. Really smart, really tough.” said Austin regarding the cornerback competition. “As we all know, you need four corners, not three. I think I expect those guys to all play a lot this year and play well for us, but I’m looking forward to using them. We may use them in different ways some days.”

It is expected that Sutton, Ahkello Witherspoon, and Levi Wallace will get the majority of snaps at corner when healthy. The mystery is regarding who will play at the slot and outside. While Sutton played the majority of the 2021 season on the outside, he has ample experience playing the slot with the Steelers, as he was previously used as the nickel corner.

While Austin referenced needing four corners, he did not mention any front-runners for the role. In the nickel package, the name that immediately comes to mind is Arthur Maulet, as he saw nearly a third of the Steelers’ defensive snaps, mostly in sub-packages. This competition will also serve as a make-or-break for 2019 draft pick Justin Layne, who will battle James Pierre, Linden Stephens, and others for the backup outside corner role.

The Steelers’ defensive coaching staff has seen a great degree of turnover compared to past seasons. From hiring a new defensive coordinator to adding former Miami Dolphins head coach Brian Flores, it will be interesting to see whether these changes impact their approach towards positional battles from the past.