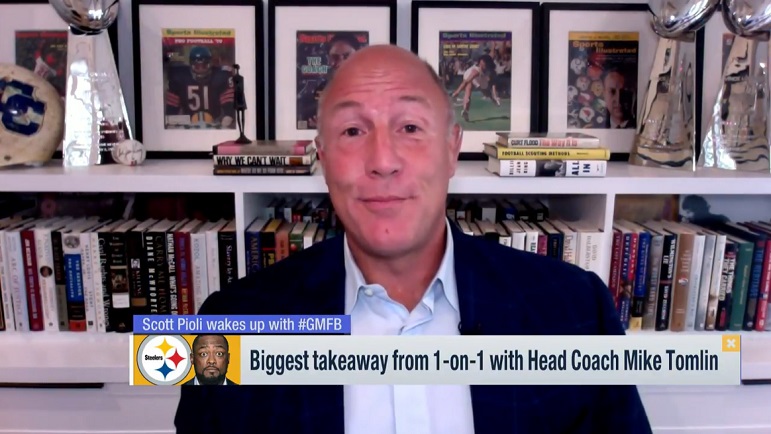 Following an offseason filled with changes from top to bottom within the Pittsburgh Steelers’ franchise, 16th-year head coach Mike Tomlin has remained one of the few constants for the black and gold entering the 2022 season.

With change comes adversity and uncertainty, two things that Tomlin has stated in the past he’s running towards, rather than away from. Throughout the offseason, Tomlin’s energy has been rather evident in OTAs, minicamp and now training camp at Saint Vincent College in Latrobe.

That energy has been so evident that former New England Patriots and Kansas City Chiefs executive-turned-NFL Network media member Scott Pioli, who was at Steelers training camp last Wednesday with NFL Network, stated on Good Morning Football Tuesday morning that Tomlin’s energy is “palpable” early in camp and is rubbing off on his team overall.

“My biggest takeaway from that conversation in Latrobe with Mike was the fact that his energy was palpable. And you know, Mike, one thing about Mike is energy also is so very authentic,” Pioli said to the Good Morning Football crew Tuesday, according to video via NFL.com. “You know, we had this conversation, I asked him this question, he had done an interview at his press conference and he started talking about his childhood, his first time playing football about putting his mouthpiece in the first time when he had to boil it in water. And he talked about the smell and the taste of it.

“Listening to Mike tell that story, you could see that he wasn’t just telling a story, he was feeling it. He was so excited to be back in training camp. And there’s this mood that’s in training camp right now with Mike Tomlin. And it’s certainly being reflected by his players,” Pioli added, according to video via NFL.com “So I just felt this incredible energy that, you know, what is this 19 seasons, 18 seasons? He is ready to go.”

Tomlin has been ready to go since the 2021 season entered with a whimper in a frustrating playoff loss on the road to the Kansas City Chiefs, ending the Ben Roethlisberger era. Then came the retirement of longtime GM Kevin Colbert, firmly making the Steelers Tomlin’s team moving forward as he is now the longest tenured person in a powerful position within the power structure of the on-field version of the Steelers.

Knowing that the Steelers are relatively young — especially on offense – and that he’s likely facing his most challenging coaching job of his career outside of the 2019 season, Tomlin has brought the juice each and every day inside the locker room and as soon as he steps across the white lines onto the field.

That’s incredibly important for the veteran coach entering his 16th season to bring the energy and force his players to match it overall. So far, his players have responded to it as they prepare for a year of transition overall, which could come with some growing pains. Still, with a passion for the game all these years later, that’s going to push the Steelers forward, especially some of the young players who are able to see their veteran head coach remaining passionate about a game he’s been around since he was a young child.