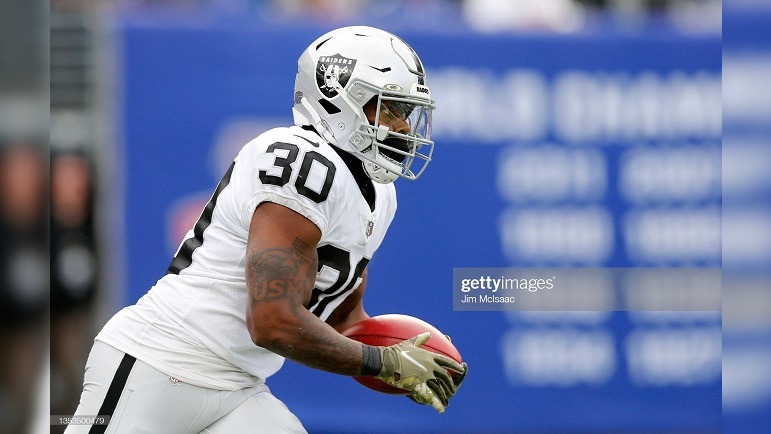 The Pittsburgh Steelers worked out two free agent running backs, Jalen Richard and Wayne Gallman, ahead of the team’s Friday night practice at Latrobe Memorial Stadium, according to Field Yates of ESPN.

Richard, who originally signed with the Oakland Raiders as an undrafted free agent in 2016 out of Southern Mississippi, played his first six seasons in the NFL with the Raiders on his way to rushing for 1,333 yards and four touchdowns on 264 total carries. He’s also caught 191 passes for 1,590 yards and three touchdowns in regular season play to date. Richard has also returned both punts and kicks so far in his NFL career, 68 punts for 485 yards and 55 kicks for 1,147 yards.

During his college career, Richard, who measured in at his 2016 Pro Day at 5083, 207 pounds, rushed for 2,086 yards and 19 touchdowns on 397 total carries. He also caught 83 passes for 675 yards and five touchdowns over that span of four seasons at Southern Mississippi.

As for Gallman, a Clemson product, he was originally selected in the fourth round of the 2017 NFL Draft by the New York Giants. In five NFL seasons, he has rushed for 1,548 yards and nine touchdowns on 366 total carries. He also has caught 81 passes for 519 yards and two touchdowns in 61 regular season games played. After spending his first four seasons with the Giants, Gallman spent time with the Atlanta Falcons and Minnesota Vikings in 2021.

The Steelers also worked out running back JaQuan Hardy on Friday in addition to Richard and Gallman, per Aaron Wilson on Twitter.

The Steelers have signed two running backs since training camp got underway at Saint Vincent College over a week ago. The two running backs signed were Jeremy McNichols and Master Teague III. Nichols, however, was placed on the team’s Reserve/Injured list earlier this week with a shoulder injury.

The Steelers’ starting running back, Najee Harris, has missed the last several camp practices with a left foot injury.