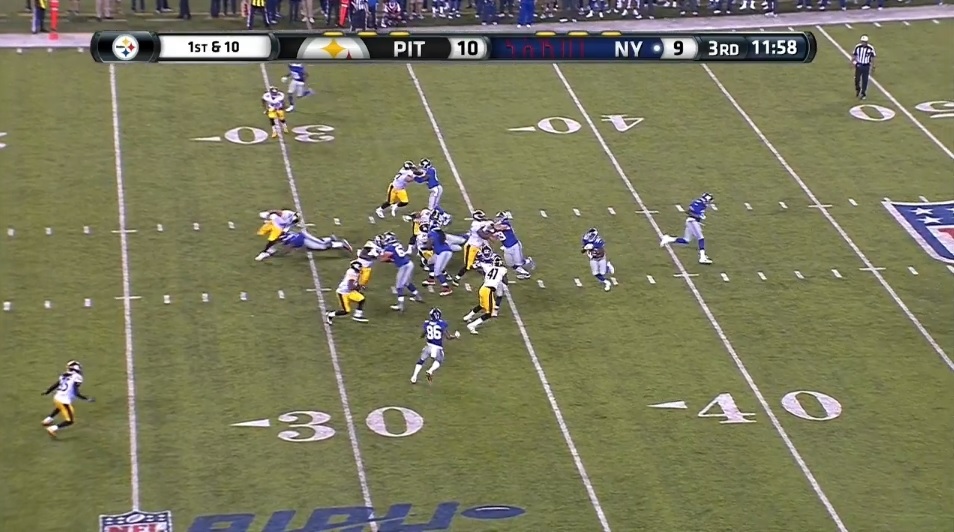 With football back in full swing here at Steelers Depot, it’s time to settle into my season-long groove when it comes to content.

You’ve probably already read my grades piece, so now it’s time to move on to the missed tackles tally and breakdown for the Steelers from last Friday’s preseason game on the road at MetLife Stadium against the New York Giants.

Despite having an otherworldly game to start an important preseason for him, Arthur Moats led the Steelers with two missed tackles against the Giants.

I’m probably nitpicking here a bit with Moats and the two missed tackles, but it’s hard to look at that number and be anywhere near disappointed in 55. He was the best defender on the field all game long, and there’s very little that can change my mind about that.

Missed tackles happen, and with Moats being on the field for much of the game, he had more opportunities than other defenders.

Moats’ first missed tackle — as well as Cam Heyward’s and Jordan Dangerfield’s — occurred on Josh Johnson’s scramble in the second quarter in which the New York quarterback made multiple defenders miss for a minimal gain.

Following Joshua Dobbs’ second interception of the game, Johnson scrambles on the first Giants play from scrimmage in the red zone.

Heyward is the first one to miss Johnson on the scramble as the veteran defensive end spins back towards the middle of the field before diving for Johnson’s legs. Once Heyward misses, Moats has the next shot at him, but the veteran linebacker is caught flat-footed against the athletic quarterback, who easily outruns his attempted arm tackle.

From there, Dangerfield comes flying downhill late and whiffs on a potential big hit on Johnson.

A few plays later, Moats recorded his second missed tackle of the night, albeit in impressive fashion, whooping rookie left tackle Chad Wheeler off the edge to put immediate pressure on Johnson.

Just look at that get-off by Moats. While it is against a rookie making his NFL debut, that type of explosion at the snap from Moats is something we haven’t seen much since he signed as a free agent with Pittsburgh.

With the pressure to not only perform well in the preseason, but also earn a spot on the 53-man roster in a deep outside linebacker room, Moats really got off to a hot start for the Steelers despite leading them in missed tackles.

Outside of some of the big-name defenders for the Steelers, the backups more than held their own, but as I mentioned in the grades piece following the win, I was a bit disappointed with the tackling attempts from Terrish Webb and Jacob Hagen.

Putting on the tape again, I realized I was a bit harsh as Hagen didn’t have a single missed tackle and Webb had just one.

Rookie running back Wayne Gallman is a load to tackle. He was a monster at Clemson and really looks the same with the Giants, even if he was going against backups.

Webb found that out the hard way once again, as the former Pitt safety helped knock off the eventual National Champion-Tigers last season on the road with Gallman in the backfield.

At the snap, Webb does a tremendous job of diagnosing the run and closing downhill fast. He even fills the right hole to get a clean shot at Gallman, but he ducks his head too early and doesn’t get enough of the big, bruising back to take him down behind the line of scrimmage.

Fortunately, Webb was able to get help from some of his teammates, as Gallman wasn’t able to turn it into a big play.

Overall, I was rather pleased with the Steelers’ tackling for the first preseason game. While they games aren’t always a big thing to go off of, keep in mind the Steelers missed 16 tackles in the preseason game against the Saints I tracked last year for the site.