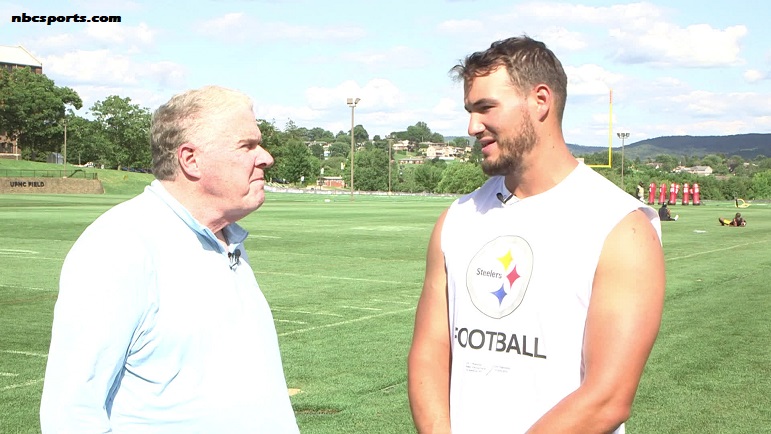 Just five full seasons into his NFL career, new Pittsburgh Steelers quarterback Mitch Trubisky has had some highs, but a number of significant lows as the former No. 2 overall pick in the 2017 NFL Draft.

Trubisky, who was drafted ahead of names like Patrick Mahomes and Deshaun Watson, is already on his third team entering his sixth season in the NFL. He led the Chicago Bears to the playoffs twice in four seasons, but could never find consistency before then sitting a season behind Josh Allen with the Buffalo Bills, which was certainly a crash to earth for the former North Carolina star.

Now, ahead of his sixth season, Trubisky finds himself in arguably the best situation he’s ever found himself in, landing with the Steelers in free agency with a chance to win the starting job in training camp on an offense loaded with high-end talent at the skill positions. Thanks to his struggles in Chicago and the humbling experience of riding the bench for a season in Buffalo, Trubisky — who spoke with NBC Sports’ Peter King Saturday from Saint Vincent College in Latrobe — stated that he’s not taking any day for granted being on the field in the black and gold, getting a chance to compete.

Football Morning In America is up!
In my latest column, you’ll find:

Really, that’s all he was looking for in free agency after his reset in Buffalo under now-New York Giants head coach Brian Daboll and superstar quarterback Josh Allen. In a three-way competition with incumbent fifth-year veteran Mason Rudolph and rookie first-round draft pick Kenny Pickett, Trubisky added that he’s been able to appreciate the guys he’s competing against, adding that it’s a great quarterback room overall with all three guys pushing each other to succeed.

“Yeah, definitely. We have a really good quarterback room with me, Kenny, Mason, and Chris [Oladokun], our young guys. So, Coach Tomlin is very transparent about the situation. I’ve taken all the reps with the ones so far so I’m just trying not to take any day for granted,” Trubisky said to King, according to video via NBCSports.com. “Just take advantage of this opportunity, continue to lead this team, whether I’m getting the reps or whether I’m watching the other guys getting the reps, just trying to learn from every single down, because we’re all installing this new offense together and just trying to get better every single day.

“So, it’s all about leading and be the best I can be and hopefully I have an opportunity to lead this team come Week One.”

Very similar chances for each guy. Pickett picked up an extra rep yesterday with the final play in seven shots that normally went to Rudolph.

The competition in Pittsburgh isn’t the first time Trubisky has found himself fighting for a role. In Chicago, Trubisky had to hold off the likes of Nick Foles in 2020, and had to win the job outright as a rookie in 2017 over veteran Mike Glennon, who was signed as a free agent prior to Trubisky being drafted.

Now, he’s the veteran in the Glennon role, having signed a deal with the Steelers prior to Pittsburgh drafting Pickett in the first round out of the University of Pittsburgh.

While he’s had a bit of an up-and-down start to training camp, the Steelers’ coaching staff led by Tomlin and second-year offensive coordinator Matt Canada are giving him every opportunity to win the job as Trubisky has gotten all the first-team reps through four days of training camp, putting him in the driver’s seat to win the starting job for the Week One opener on the road against the Cincinnati Bengals on Sept. 11 at Paul Brown Stadium.

That said, Rudolph is certainly inserting himself into the discussion with a strong start to training camp. With those two pushing each other, and Pickett settling into his first NFL training camp, the Steelers’ quarterback situation will be better off from the camp competition overall.