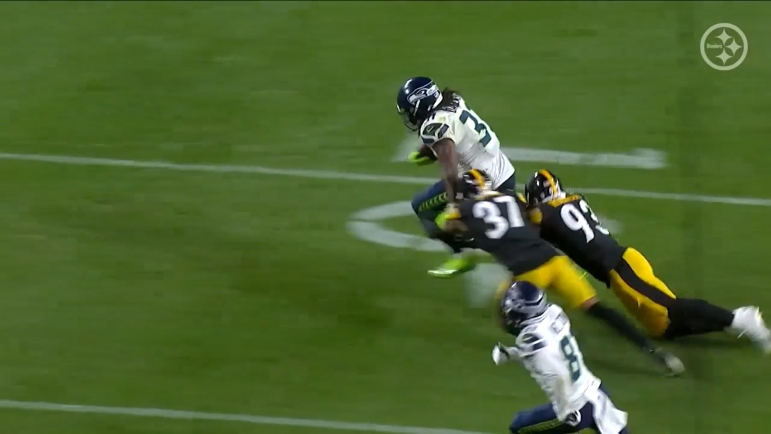 All those live tackling reps during training camp under head coach Mike Tomlin seemed to pay off — for the most part — for the Pittsburgh Steelers in the preseason opener against the Seattle Seahawks at Acrisure Stadium.

In the 32-25 win over Seattle, the Steelers missed just 12 tackles on the night. That number might appear a bit alarming on an initial reading, but considering it was the first preseason game, it was pretty solid overall. That said, four of the 12 misses on the night led to significant plays for the Seahawks, including three that led directly to one touchdown on the night.

Overall though, the Steelers should be pleased with the tackling performance from the preseason opener. Those reps and live work in training camp had them prepared for the game, which is all you can ask for.

As you can see, not all that bad overall. It’s not great to see someone like Damontae Kazee and Tre Norwood missing tackles on special teams, especially considering they’re going to have roles in that area throughout the 2022 season. That said, it was a relatively strong night overall for the Steelers in the missed tackles department.

It took until the third drive of the game for the Steelers to miss a tackle on the night, which is a positive development overall. On that same drive, rookie DeMarvin Leal missed his first shot at sacking a quarterback in the NFL, missing on Seattle’s Geno Smith after a great rush to beat the right guard.

I debated labeling a miss, but it’s a play Leal would himself say he needs to make, especially by getting into the backfield as quickly as he did and having a lane like that to get a shot on Leal. Of course, with Leal’s miss, it allows Smith to scramble and pick up the first down to move the chains, which can’t happen moving forward for this Steelers defense to truly be dominant.

The very next play, unfortunately, second-year linebacker Buddy Johnson missed his first and only tackle of the game, doing a really poor job of breaking down in space when he gets to Seattle running back Travis Homer in the open field. From there, Johnson ducks his head and lunges, making it relatively easy for Homer to avoid him.

Fortunately for Johnson, teammates rally to the football for the stop, keeping Homer to a short gain, rather than turning the missed tackle into a huge play.

Opening up the third quarter, UDFA cornerback Carlins Platel did himself no favors in an effort to make the 53-man roster. Platel, covering the flat on a rollout from Drew Lock to rookie wide receiver Bo Melton, misses Melton badly in space.

Platel does a nice job turning and running downhill to the football, closing ground quickly. Like Johnson though, he does a poor job in space of breaking down, ducks his head and whiffs badly on Melton along the sideline, resulting in the 39-yard catch and run that eventually led to a Seattle touchdown on the drive.

Finally, in the fourth quarter rookie linebacker Mark Robinson and second-year safety Donovan Stiner had arguably the worst missed tackles on the night since the misses wound up in the end zone.

Robinson struggled in coverage against Seattle running back DeeJay Dallas on the option route coming out of the backfield. He guessed the direction Dallas was going and guessed wrong, leading to an easy win for the veteran running back. From there though, Robinson has to get Dallas to the turf. He fails, and so does Stiner coming downhill in support.

Once Dallas forces Stiner and Robinson to miss, he then recorded a missed tackle on James Pierre, who goes low trying to cut Dallas’ legs out from underneath him. He fails, and Dallas is able to leap over the top for the score.

Jaylen Warren – 5
Anthony McFarland Jr. – 4 (one on special teams)
Steven Sims – 3 (two on special teams)
Tyler Snead – 2
Tyler Vaughns – 2
Kenny Pickett – 2
Mitch Trubisky – 1
Both McFarland and Warren were fantastic on the night as soon as they stepped foot between the white lines. McFarland, facing a tall task of making the 53-man roster in his third season after two disappointing years, got off to a quick start, forcing a missed tackle on the game’s opening kickoff.

Later, on the first drive of the game McFarland showed off his open-field prowess, forcing a Seattle defensive back to miss in space on the way to ripping off a 24-yard run.

That’s not something we’ve seem from McFarland through two seasons, so it was a welcome sight Saturday night against the Seahawks.

On the next drive, McFarland again showed his ability to make defenders miss, and displayed great footwork in the backfield to avoid a tackle for loss, getting out behind left tackle Dan Moore Jr. to rip off a 7-yard run against the Seattle defense.

It might not look like much, but that’s just a phenomenal job overall from McFarland to turn what should have been a 2-yard loss into a 7-yard gain thanks to his footwork and contact balance.

Later in the first quarter, Steven Sims got into the mix, forcing two missed tackles on his 38-yard punt return, which undoubtedly made special teams coordinator Danny Smith very happy. Last season, the Steelers really struggled at times to get much juice out of the punt return game, but Sims showed what he brings to the table with his one return.

That’s just an awesome job by Sims to make sure he secures the catch first with four defenders bearing down on him. He then has the wherewithal to make the defenders miss in a phone booth before finding green grass and ripping off chunks of yardage.

Sims still has a ways to go in making the roster, but Saturday night’s performance in the punt return game was a great step in the right direction.

Finally, Warren — arguably the star of the show from Saturday night with fellow rookie Kenny Pickett — showed just how physical and strong he is at the point of contact. He made five defenders miss on the night and really looked like a handful for defenders to bring down throughout the night.

In the second quarter Warren took a short little check down from Mason Rudolph and turned a 3-yard gain into a 12-yard gain thanks to his strength and ability to run through tackles.

He’s like a human bowling ball with the football in his hands. Defenders bounce off of him, and he shrugs off others. He feels like a near lock at this point to make the 53-man roster based on his play against the Seahawks, and his daily showing in training camp at Saint Vincent College.