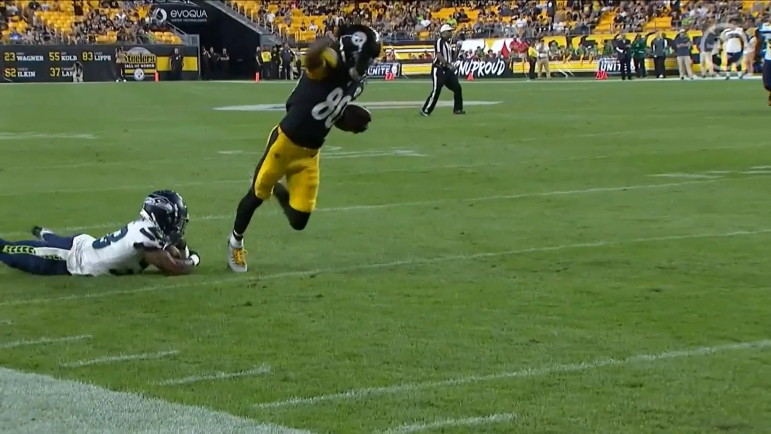 It’s not often Mike Tomlin heaps praise on a young player lest it go to his head. But perhaps he’s getting a little soft in his older age. Following Thursday’s practice, he was asked about WR Tyler Vaughns and Tomlin couldn’t help but throw some praise his way.

“How about the playmaking at the end of games?” he said via the team website. “Can’t say enough about that. The in-stadium things we respect.”

Vaughns has stepped up once he’s stepped inside stadiums. Through the first two weeks, he’s caught a combined six passes for 88 yards and one touchdown on eight targets. But numbers alone don’t tell the story. Context does. In the opener, Vaughns caught the game-winning, 24-yard touchdown with three seconds left, turning upfield, eluding the covering cornerback, and racing into the end zone for the score. Vaughns didn’t score the game-winner last weekend against Jacksonville but was Mason Rudolph’s favorite target, catching three passes for 51 yards that setup Tyler Snead’s game-winning score.

Vaughns also spoke to reporters after today’s session and talked about how he’s improved his game.

“I’ve been trying to focus on like my angles after I catch the ball. Make sure I can secure the ball. Just ball security in general.”

Those angles have increased his YAC and put him in the end zone. His name was one that came up during training camp. He started and finished well, earning a B+ in our most recent recap. Here’s part of what we wrote:

“He definitely doesn’t have great long speed. There is no standout trait. But this dude knows how to run routes and break tackles. He’s quick and sells his routes well to create separation at the break point. He’s quick to the tuck, getting upfield and gaining YAC.”

Aside from making plays in-stadium, Tomlin’s liked his overall game.

“Beyond that, man, he’s a capable and willing worker out here. He’s a versatile from a positional standpoint. Like some of the things I’m seeing from,.”

It’ll still be an uphill battle for Vaughns to make the 53, bounced by the like of Miles Boykin, Gunner Olszewski, and fourth-round rookie Calvin Austin. But his play has made him a strong contender to stick on the practice squad. Nothing about Vaughns’ game sticks out in an obvious way, but he’s a gamer and has made big-plays with the game on the line. That’s a good way to stick around a locker room, especially for the old-school, results-driven Tomlin.

Check out a full film room breakdown on Vaughns from our Tyler Wise.