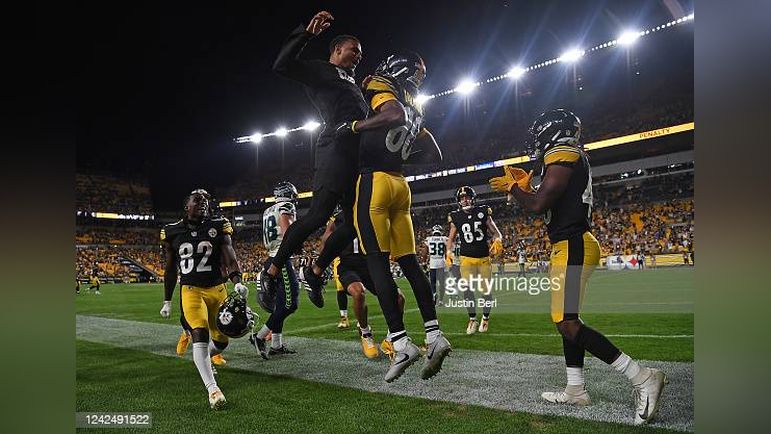 There may not be a deeper position group on the Steelers than the wide receivers. From the practice fields in Latrobe to the stadium, guys up and down the depth chart have impressed. None may have surprised Steelers fans more than former USC wide receiver, Tyler Vaughns, who has made a name for himself within Steelers Nation for some impressive plays late in both preseason games.

You may not have noticed, but Tyler Vaughns has actually been a part of the Steelers organization since September 7th of last year when he was signed to the team’s practice squad after spending his rookie preseason with the Indianapolis Colts. He had a solid college career with the USC Trojans finishing with 222 receptions, 2801 yards, and 20 touchdowns over four years but ultimately went undrafted in 2021.

A big reason for him going undrafted was his measurables or lack thereof.

Nonetheless, Vaughns has proven that he doesn’t need blazing speed, superman strength, or the ability to jump out of the gym to get open, as he’s consistently done so this preseason. Let’s take a look at the tape and see how he’s looked from the eye in the sky.

While Vaughns doesn’t have the intangibles, he is a skilled route runner. The unorthodox way he runs his routes consistently keeps defensive backs off balance.

Watch the tempo in which he moves his feet off the line of scrimmage. There’s almost a pause. Then he gets a tremendous knee drive and long strides out of it to eat up the corners cushion. This causes the corner to turn and bail right when Vaughns begins to put his foot in the ground to break back towards the QB. All of this creates about four yards of cushion, something hard to do against man coverage on a five-yard curl route.

Here’s another example of a curl route. He doesn’t do anything special here other than show off how quickly he can stop at the top of his route. Often you’ll see guys take four or five steps to slow down enough to change direction. Vaughns reminds me of Diontae Johnson in the way he’s able to stop on a dime. He has one hard “bam step” at the top and it’s effective enough to stop all of his momentum.

As Vaughns has shown above, he also has great contact balance and the ability to break tackles.

I put together some clips below that highlight all of the broken/missed tackles he’s forced this season. We know Mike Tomlin loves guys that can create YAC, and Vaughns has proven he can provide that. The best example, as you’ve likely seen at this point, was on his game-winning touchdown in the final minute of the Seahawks game.

One thing I've noticed about Tyler Vaughns through 2 games is his impressive contact balance.

He doesn't possess an imposing figure or crazy measurables, but he's slippery after the catch.

I have him charted for 6 missed/broken tackles on 6 catches. Impressive. #Steelers pic.twitter.com/lP4dCsy8w2

I love this next play by Vaughns because it shows awareness and football IQ. He has a fly route and notices off the snap that it’s a simple cover-3 coverage. This means the corner is going to continue to bail into his deep third. Vaughns and Mason Rudolph both recognize this and are both on the same page. Vaughns then powers down, not running into coverage and Rudolph hits him for the easy connection. Great job to finish the play by breaking a few more tackles and gaining five extra yards.

Vaughns has also impressed me away from the football. He’s lined up at the bottom of the screen on this play. He beings by running a solid route, but once he sees the quarterback begin to scramble he starts working his way into the line of sight and into green grass. Once the quarterback commits to the run, however, he turns into a blocker and eats up the cornerback. Solid play and solid effort all around from Vaughns, working in all phases of the game here even when he doesn’t get the football.

While Vaughns has shown a lot of good on tape, there are some flaws to his game.

One of the biggest flaws, and I’m not sure if it’s fixable at this point, is his long speed. He’ll never be able to line him up on the outside and be expected to run by NFL-caliber cornerbacks. With his 4.69 speed, it’s going to be very difficult for him to stack DBs vertically. In the below play, the corner is able to easily stay in Vaughns’s pocket and rides him towards the sidelines for the incompletion.

Combined with his relative lack of speed is Vaughns’s lack of strength. This will inhibit him in contested catch situations, as seen below, where he gets eaten up at the catch point by the cornerback.

There were WR groups in the past for the Steelers that we may have been able to entertain the conversation of Tyler Vaughns sticking on the final 53-man roster, but with the current group shaping up to be Diontae Johnson, Chase Claypool, George Pickens, Calvin Austin, Gunner Olszewski, and Miles Boykin, I’m just not seeing the spot for Vaughns. One could argue that Vaughns has been better as strictly a wide receiver than Boykin, but Boykin offers much more value with his special teams’ ability. An ability that has yet to be seen from Vaughns. If you’re keeping six wide receivers that WR6 (and hopefully WR5) better be able to offer something on special teams.

I do hope Vaughns is able to stick around on the Steelers’ practice squad for another season, but I wouldn’t be shocked if another WR-needy team scoops him up if he does indeed hit waivers.

What are your thoughts on Tyler Vaughns? Do you think that he’s done enough to warrant a spot on 53 man roster? Or just the practice squad? Please leave your thoughts in the comments section below and thanks again for reading!