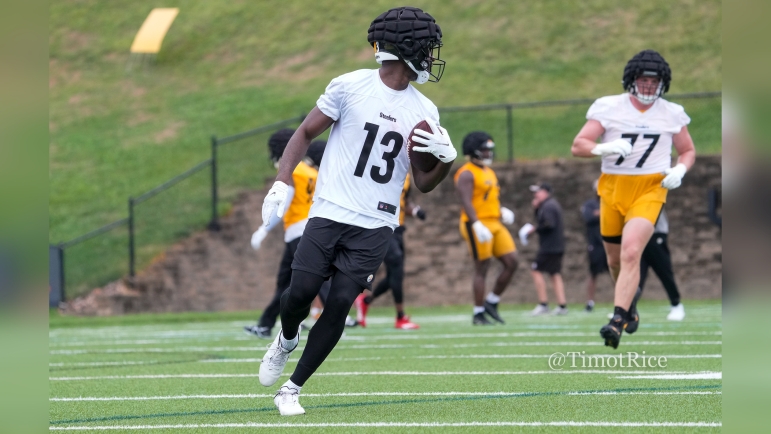 Diontae Johnson is fresh off of signing a new extension and will be your lead dog. He has improved in each of his seasons and can still be even better. Whoever is the starting quarterback is going to rely on Johnson. Chase Claypool is also listed on the initial depth chart as a starter and has produced similar numbers in his first two seasons. He averaged 107 targets, 60 receptions and 866 yards and yet is first two seasons look somewhat contrary. We are all hoping the real Claypool shows up this season and builds on the potential he showed in his rookie season.

Rookie George Pickens is also listed as a starter and has been getting a lot of positive attention in the early parts of training camp. The second round pick has been dynamic, showing with chemistry with the quarterbacks and his catch radius and is drawing comparisons to A.J. Green. Calvin Austin III is a player we are all hoping can inject the element of speed back into the offense. He has worked mostly in the slot so far and is also listed as a punt and kickoff returner. He is undersized but can become a blur when he gets his hands on the ball.

They usually keep five on the roster and they could go to six. Here are a few candidates to round out the group.

Boykin is a player the team had showed interest in during the 2019 draft before being selected by Baltimore. He spent three seasons there playing in 40 games with 24 starts. As a receiver, he has 33 career receptions for 470 yards and seven touchdowns. He also has experience on special teams with 417 career snaps.

On the positive side, he is listed as the primary back up to Pickens, likely as the Z receiver, on the initial depth chart. He has the most starting experience of the potential reserves. All the measurables are met in the height, weight and speed categories and he has special teams experience. The film room on him showed a physical receiver with good burst and a solid understanding of how to manipulate defensive backs.

On the negative side, he fell out of favor in Baltimore and they haven’t had a ton of quality receivers there. He is coming off a season where he dealt with hamstring issues essentially cutting his season in half. Getting on the same page as the quarterback seemed to be an issue and that is evidenced by his career production.

This wideout enters his second season in Pittsburgh and is a player who I believe we all think we would like to see more of an opportunity. After being a second round pick of the Chicago Bears in 2018 his first three seasons showed some potential. He played in 49 games starting 17 and put up decent numbers that included 139 receptions, 1,620 yards and eleven touchdowns. Since then he hasn’t been able to get any playing time.

On the positive side, he was a highly thought of receiver coming out of college. His production in his first three seasons was solid overall.  His quarterback a majority of the time in Chicago was Mitch Trubisky so he has some familiarity. He is highly competitive, has solid speed and can get open on all three levels. He is listed as the backup behind Johnson.

On the negative side, he struggled to get on the field in 2021 first with the Houston Texans and then with Pittsburgh. Cody White saw playing time over him in 2021. Has done some returning on special teams but has just 19 special team snaps in the last two years. He’ll need to participate there if he is the fifth or sixth receiver.

He made his mark as a return specialist in New England including an All-Pro season in 2020 when he led the league in punt return yards and yards per return. In his career he has 9 receptions for 127 yards and a lone touchdown reception. He also has 6 rushes for 32 yards. As a returner, he has 66 punt returns for 834 yards averaging 12.6 yards and one score. As a kick returner, he has 36 returns for 834 yards for 23.2 yard average.

On the positive side, with him on your roster you don’t have to search for a return man. He has the experience and production on punts and kickoffs and that is why they signed him. He has 472 special team snaps and brings “explosiveness and stability” to the return game.

On the negative side, does he add anything to the offense? He too came from a team with average receiving talent and was rarely used on the offense. He had 253 offensive snaps in three seasons with minimal production.