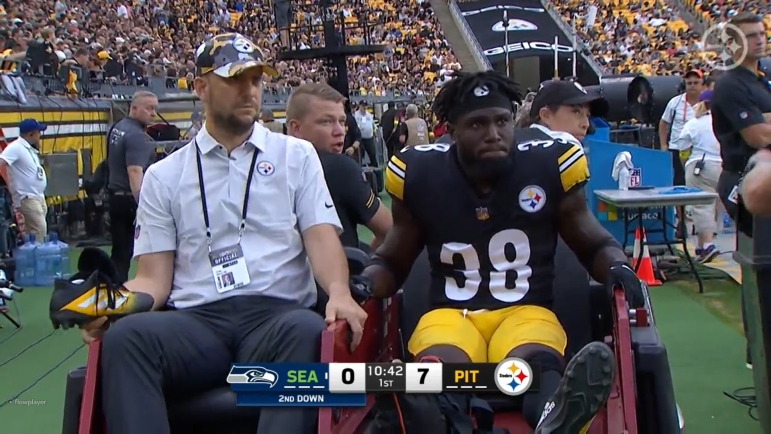 Pittsburgh Steelers S Karl Joseph exited the team’s opening defensive drive with an injury and was seen on a cart with an air cast on his right ankle/leg.

The air cast is never a good sign when it comes to lower-body injuries, and it’s not great to see Joseph go down this early. It’s never good to see anyone get hurt, and Joseph has had an impressive camp so far, getting second-team reps at safety and he has the pedigree as a former starter in the league.

If the injury ends up being serious, it’s likely the Steelers will look to waive/injure Joseph. He was battling with Miles Killebrew for a potential roster spot, but unfortunately, it looks as if this injury could impact that in a major way.

On the second drive, Ahkello Witherspoon also exited with an injury after making a tackle on Seattle Seahawks running back Kenneth Walker III.

The injury didn’t appear to be too serious, but Witherspoon left the game with trainers. He walked off under his own power, and it looked to be a right arm/shoulder injury.

Witherspoon is obviously extremely important to this team, as he led the Steelers in interceptions last year and should be the team’s starting outside cornerback. Hopefully, the injury isn’t too serious.

ESPN’s Brooke Pryor tweeted that it’s a shoulder injury and Witherspoon is questionable to return.

Right before halftime, safety Damontae Kazee also left with an injury. Kazee made a tackle and immediately headed to the injury tent. Per Pryor, he quickly exited the medical tent and still had his helmet, which would lead me to believe that it was simply a check by the concussion spotter following Kazee’s tackle.

Damontae Kazee is out of the medical tent and still has his helmet.