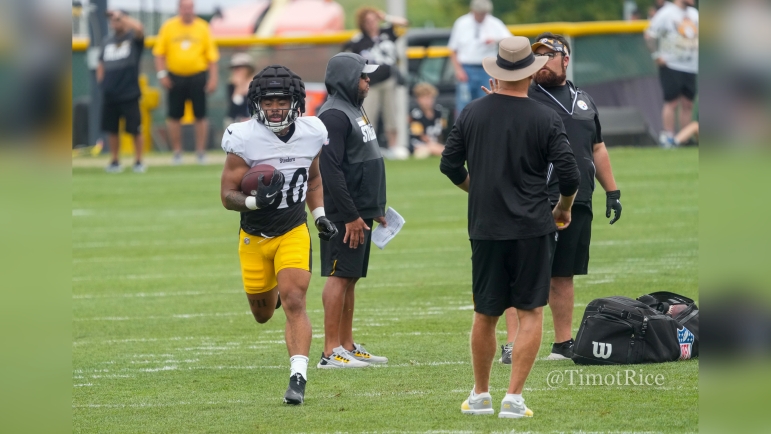 After being praised by Mike Tomlin yesterday for his work in practice, undrafted free agent running back Jaylen Warren followed that up with another impressive day of practice. Warren also responded to Tomlin’s praise about his effort.

“I mean, obviously it’s a good feeling, you know, coming in here, undrafted, knowing you gotta prove things. It’s something I’m kind of used to, and I don’t complain about nothing, hearing about it getting noticed, it’s a really good feeling,” Warren said in an interview with Craig Wolfley and Mike Prisuta.

Warren certainly has had to prove a lot in his football journey thus far, as he’s had to prove he belongs at three different colleges and had to prove he was the best running back at Oklahoma State after opening the year third on the depth chart.

Warren earned himself more praise today from Tomlin, as well.

“He appears to be highly conditioned and I think it kind of starts there for a young guy. We always say one man’s misfortune is another man’s opportunity. And so there’s some short lines at running back, but if you’re not highly conditioned, you’re not in position yourself to take advantage of it. And so, kudos to him for coming ready,” Tomlin said in his press conference today.

Jeremy McNichols and Najee Harris were both out of practice, and both missed a lot of yesterday’s session as well (with McNichols not participating at all). Warren has clearly put himself in a position to get himself noticed by the staff for the right reasons, which certainly helps his chances to make the final 53-man roster.

There’s absolutely an opportunity and a path for Warren to have a role on the roster. Pittsburgh needs someone to step up and show they can take carries from Najee Harris when Harris needs a rest. In terms of running style, Warren might be the closest to Harris on the roster. If Pittsburgh chooses to go with someone that can churn out yards and wear down defenses the way Harris does, Warren could find himself on the roster.

The No. 2 running back job will likely be between Benny Snell Jr., McNichols, Warren or fellow undrafted rookie Mateao Durant. Durant has more burst than Warren, but he struggles to run through contact and break tackles. I personally don’t see a path for Anthony McFarland to compete for carries this year, and based on early returns I would think that Snell, McNichols and Warren are really the three guys the staff might be honed in on right now.

The severity of McNichols’ injury could certainly affect things, and with Harris out as well, the staff could turn to an outside free agent just to get another guy in the room for now. Obviously, that could shake things up, but from everything we’ve heard from Warren and from what I’ve seen from him on tape in college, I think he can have a role in the NFL.

If he makes the team this year, maybe he ends up behind Snell or McNichols, but he’s a guy that’s shown he’ll fight for his opportunity. If he can keep up his performance, he could force the coaching staff to make a tough decision in the running back room.