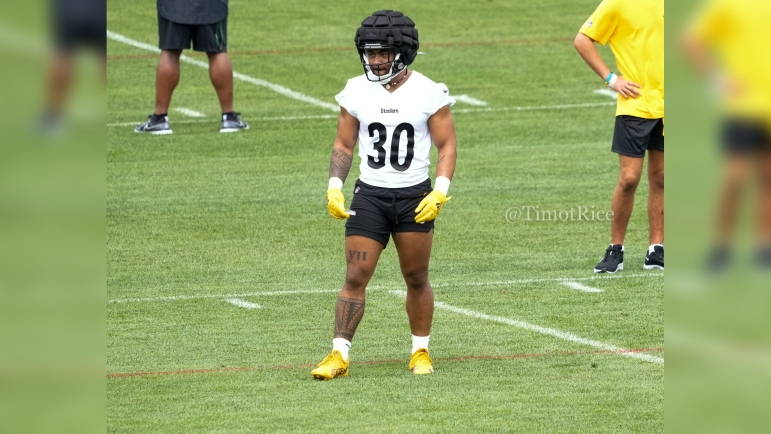 “He has an appetite for the competition, that’s a good thing,” Tomlin said. “He’s learning and learning fast. I think the most significant thing that has captured my attention is that he seems really comfortable in these waters from a competition standpoint.”

With Jeremy McNichols out today, Warren was given a chance to step up. Alex Kozora reported he was one of the standouts during backs on backers, and Tomlin was obviously impressed with what he saw out of the back from Oklahoma State.

The Steelers need someone in the running back room to step up as a reliable alternative to Najee Harris to help reduce the tread on his tires and lower his workload. When Pittsburgh signed McNichols, it was expected that he or Benny Snell Jr. could be that guy. Warren’s toughness and work ethic has always garnered praise, and despite his small stature at 5’8″, Warren runs hard and embraces contact.

To me, that sounds like a Pittsburgh Steelers running back. Warren still has an uphill path to make the roster, but if he can keep impressing the staff he’s a guy I would like to see on the 53-man roster.

Depending on the severity of McNichols’ injury, Warren could see an increase in opportunities. With Harris also leaving practice today with an injury (luckily one that doesn’t appear serious), Pittsburgh could be cautious with him in the coming days which would open the door for Warren to continue to get reps.

Warren’s been a player who has always been overlooked. He played at three different colleges and opened the season as the third-string running back on Oklahoma State’s depth chart before becoming an All-Big 12 player and team captain. Given his history, I’d be willing to bet he’s really embracing the long odds he currently has to crack the 53-man roster and wants to go above and beyond to show Pittsburgh he’s capable of doing so.

Warren also showed more as a blocker than fellow UDFA Mateao Durant in college and would probably provide more in that aspect of his game than someone like Anthony McFarland. The way he runs and embraces contact is similar in a way to Harris, but he’s not as advanced as a runner yet. He’s the type of player though that with enough development could probably carve out a nice role for himself in the NFL.

Let’s see if Warren can keep making plays and impressing Tomlin and the rest of the coaching staff as camp continues.