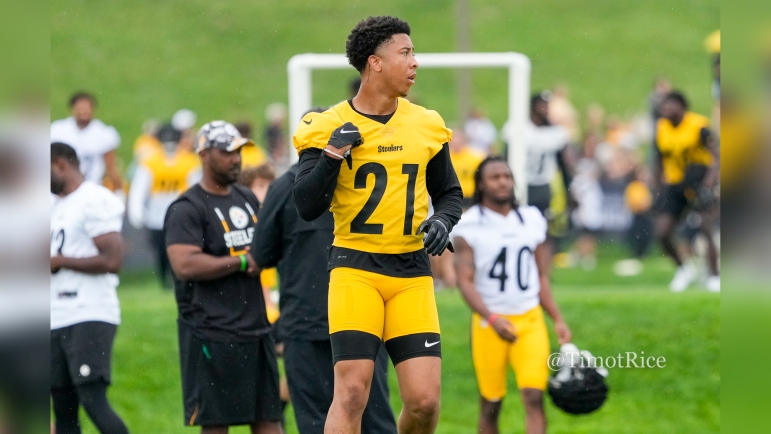 It’s not often that a second-year player is the one lending a helping hand from a playbook perspective to a veteran. That’s what is happening in Pittsburgh though with second-year defensive back Tre Norwood and veteran free agent signee Levi Wallace.

Speaking with reporters Thursday prior to practice at the UPMC Rooney Sports Complex on the South Side, Wallace revealed that Norwood has taken him under his wing a bit, helping him get comfortable in the defensive scheme and the complexities of the defense overall. That takes a lot to brush aside any ego as a veteran dealing with a young player, especially when asking for help, but with Wallace there is no ego.

His friendship he’s developed with Norwood is deeper than football. Leaning on his friend to help make him better and improve the defense overall.

“There is no ego. He wants all his boys to do well,” Wallace said to Steelers.com’s Teresa Varley regarding Norwood. “Just having a guy like that, easy to talk to, it’s beneficial for me.”

It is beneficial for Wallace, who gets a crash course in the defensive scheme, especially in nickel, but it’s also beneficial for the Steelers’ defense. Having a young player with the experience Norwood has helping bring along a key veteran like Wallace, who will be counted on heavily in the secondary attempting to fill the hole created by the departure of Joe Haden.

For Norwood, being asked to help out a veteran so early in his career is huge for his own development as a future leader and key contributor on the Steelers’ defense as that defensive chess piece in the secondary, one that can play safety or in the slot under first-year defensive coordinator Teryl Austin.

“Levi is a great guy,” Norwood said to Varley, according to Steelers.com. “He is a great football player, even better person. Great character. High IQ guy. He is a vet himself and for him to ask me for help, ask me for things, it says a lot about him. He is not filled with an ego, or too proud. He is looking to come in and get better. That describes our room as a whole. We have great vets…we don’t have a lot of ego in the room and that helps us grow together.

“It feels good to know I can help. I am still fresh in,” Norwood added. “It makes you feel good that somebody wants to ask you for help and allow you to help him.”

For Norwood to feel comfortable enough as a second-year guy to mentor a veteran entering his fifth year in the league says quite a bit about the culture that exists in Pittsburgh. Everyone is helping each other, aiming to put everyone in the best possible position to succeed, all without the likes of any sort of ego inside the locker room. That’s a breath of fresh air compared to what the Steelers have dealt with in the past.