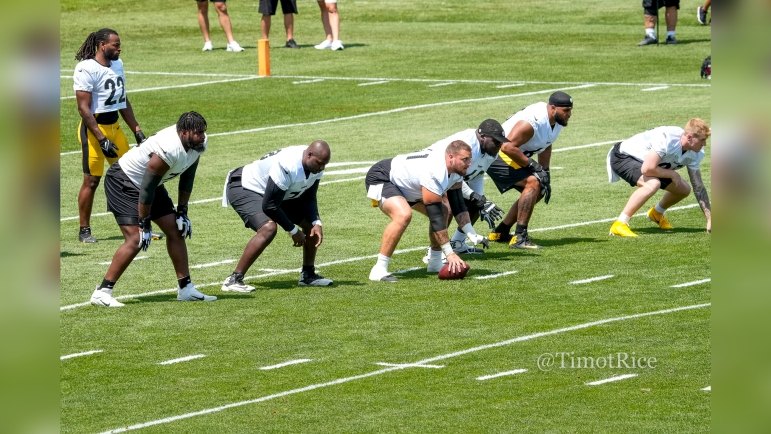 The Pittsburgh Steelers’ 2021 offensive line play was, in a word, uninspiring. Former Offensive Line Coach Paul Alexander, who coached the division rival Cincinnati Bengals offensive line for 24 seasons delved into said poor play and what it means for 2022.

The Steelers’ 2021 offseason saw the departure of long-time starters guard David DeCastro, center Maurkice Pouncey, and tackle Alejandro Villanueva. This left offensive tackle Chukwuma Okorafor as the last man standing from the 2020 starting line-up, forcing the Steelers’ to essentially start from scratch in the trenches. Green, who primarily played the left guard position in college, started at center, and was benched for backup J.C. Hassenauer late in the regular season. Green has since switched positions, competing with third-year guard Kevin Dotson for the left guard starting role in training camp this summer. Additionally, due to injury complications to 2021 projected starting left tackle Zach Banner, Moore Jr took over the starting tackle role. While Moore earned high praise from 18-year Quarterback Ben Roethlisberger, his 2021 play was on par for a fourth-round rookie.

“They brought in Kevin Dotson to be the left guard. He and Kendrick Green are competing every day,” Alexander said regarding the Steelers’ competition at left guard. “They’re going back and forth. You can see the talent in Green. He’s a powerful guy. You know, I can see why they drafted him, but he doesn’t look ready. Dotson looks more polished and ready to play”

While the Steelers recently released depth chart is by no means an end-all-be-all, it is notable that Dotson and Green were both listed as the team’s first-team starting left guard. Kendrick Green, who is 305 pounds, and has a 77” wingspan, is considered undersized for the guard position. Given that Dotson began the 2021 season as the starter, it’s a little hard to imagine a scenario where Green beats him out for the starting role.

“They’ve got Mason Cole playing at center. And like you said, James Daniels at right guard,” Alexander stated in reference to the Steelers’ recent free agent signings. “The last couple practices that we watched, they’re building, they’re creating, it doesn’t look good right now, but these things don’t happen overnight either.”

Cole and Daniels, who were among former General Manager Kevin Colbert’s last free agent signings, are both projected to start at their respective positions. Daniels is a former Chicago Bears second-round pick with years of starting experience at the guard and center positions. Notably, Daniels has experience playing alongside new Steelers quarterback Mitch Trubisky, as they started together for several seasons. On the other hand, Cole started several seasons at center for the Arizona Cardinals and Minnesota Vikings. Much like Green, Cole began his rookie season with Arizona in 2018 as the team’s starting center, only to be demoted to a backup interior lineman his second season. Cole was subsequently traded to Minnesota, where he was their starting center in 2021.

The best way for an offensive line to improve is by practicing playing together, which the new Offensive line Coach Pat Meyer must stress. This is unfamiliar territory for the Steelers, as they saw many of the same faces along the offensive line in the 2010s. While this will not be an overnight fix for the Steelers, it’s reasonable to hope that training camp reps will materialize into an improvement in chemistry and play from 2021.