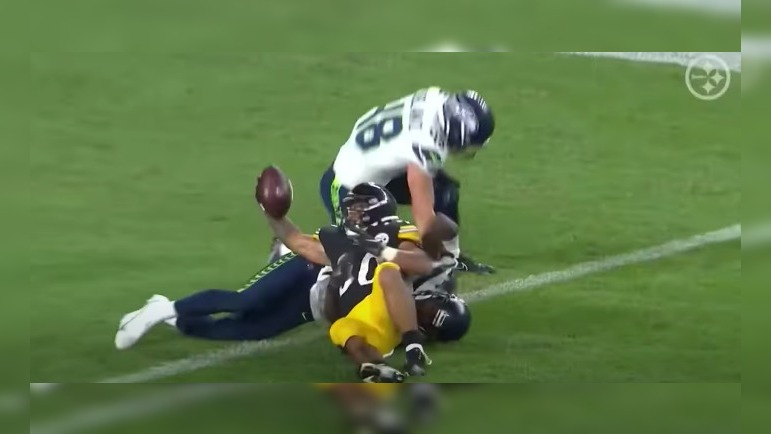 The Pittsburgh Steelers defeated the Seattle Seahawks in stunning fashion Saturday night at Acrisure Stadium to the score of 32-25. The offense was on fire for most of the game as all three QBs threw TD passes and posted a QBR of 100.0 or higher on the night. The running game also put together a strong performance by accumulating 185 yards on the ground.

One of the backs that had a fair amount of success in his rookie debut was UDFA RB Jaylen Warren. Warren has often been regarded as the training camp darling due to his physical running style and willingness to stick his face in the fan as a blocker in backs on backers drills. We saw a live example of that Saturday night on this play as Warren steps up in the B gap to pick up the blitzing LB, putting his face right into the defender’s chest to give Mason Rudolph time to throw.

While known for being a tackler breaker thanks to his strength and compact size, Warren showcased his ability as a pass catcher often throughout the contest. Here at the 7:38-mark in the second quarter, Mason Rudolph takes the snap and fires the pass short middle to Warren on the check down where he breaks through one arm tackle then sidesteps another defender before getting into a collision with three defenders for a ten-yard gain.

Only shortly after that did we see Warren’s one potential downfall of the night. At the 7:11-mark, Warren gets the handoff and runs off the right tackle, again breaking another tackle attempt by the LB as he gets outside. However, as the defense rallies to bring him down, Warren coughs up the ball onto the turf. Thankfully, Miles Boykin recovers the ball shortly after to maintain possession after the 13-yard run. Warren was criticized by Tomlin in the post-game press conference for fumbling the ball, something that Warren needs to clean up to stay in the good graces of the coaching staff.

Warren was pulled right after the fumble for a couple plays but made up for it through the rest of the contest. At the 5:04-mark, Warren receives the handoff from Rudolph on a run up the middle, attempting to run through the arm tackle of Poona Ford who manages to drag him down to the ground after a four-yard gain.

Right before the end of the half with 20 seconds left, Warren gets the carry to the left-side B gap but bounces it right when he sees #57 Cody Barton in the hole. He then proceeds to go off the right guard, spinning out of a tackle attempt as he gets to the outside before getting taken down to PIT 32 for a seven-yard pickup. This play showcases Warren’s tackle breaking ability as well as his vision to bounce the run with a defender right in front of him to turn a stuff into a nice gain.

When Pittsburgh got the ball back to start the second half, Warren showed good chemistry with rookie QB Kenny Pickett on what would be a successful scoring drive. At the 9:23-mark in the third quarter, Pickett takes the snap and throws the pass to Warren who aligns in the slot on the right side of the formation, running a quick out route where he jukes back inside to make one defender miss in space before getting corralled by multiple Seahawks after a seven-yard pickup from the slot.

Only a couple of plays later at the 7:25-mark, Warren runs a swing route from the backfield toward the left sideline and catches the pass from Pickett, running up the sideline to try and beat the only defender in pursuit who manages to ankle tackle him inside the five as Warren reaches out for the goal line, falling just short at the three-yard line for a ten-yard gain.

Warren capped off his night the very next play, getting rewarded for his first two receptions of the drive with a third that would result in the score. At the 6:50-mark, Pickett fakes the give on the play action to Warren who runs toward the end zone as Pickett rolls to his left and fires the pass to Warren. Warren leaps up to catch the pass and is immediately met by two Seahawks at the goal line but pulls off his best Antonio Brown impression on the Immaculate Extension and gets the ball across the plane for the touchdown.

Overall, it was a strong performance for Warren on the night who totaled six carries for 34 yards (5.7 YPC) and four receptions for another 30 yards and a TD. He showed us his calling card traits including his ability to make defenders miss and break tackles thanks to his physicality and low center of gravity as a compact runner. He also showcased good vision to hit the hole or bounce runs to the outside, setting up defenders well to either run through an arm tackle or make them miss in space altogether.

Warren also had a good showing in the passing game, operating as a check down option as well as a receiver out of the backfield and in the slot. He displays natural hands and was able to pick up YAC, coming up big with three catches to start the second half including Pickett’s first TD.

However, Warren did stick out in a negative sense with the fumble on the 13-yard run, something that Tomlin brought up after the game as a negative that Warren must fix. While Warren likely had the strongest outing of all the backs, ball security is something that Tomlin values above all else at the position, thus he needs to make sure to stress that component of his game going forward and avoid coughing up the rock again this preseason to have a chance of making the 53-man roster. Still, it was a good debut for the UDFA rookie who has had a good camp thus far and finds himself in the thick of it when it comes to the competition for a roster spot.

What are your thoughts on Jaylen Warren? Do you think he had a strong outing against the Seahawks? Does his receiving prowess help phis chances of making the roster? How much should the fumble weigh into his odds at the 53-man roster? Please leave your thoughts in the comments section below and thanks again for reading!