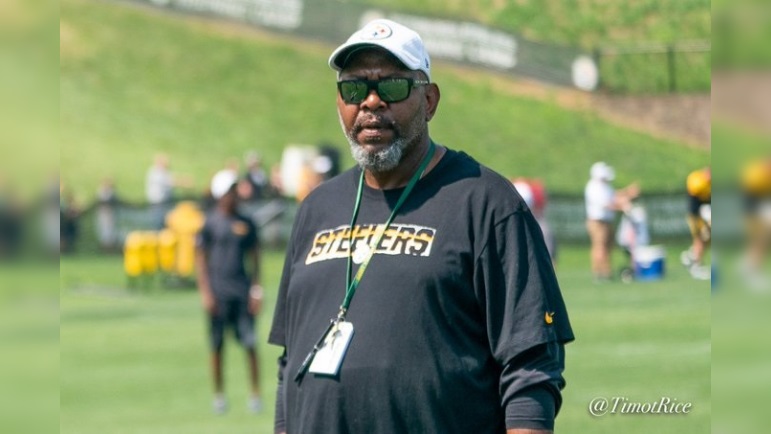 It’s been well-documented that the Pittsburgh Steelers have had a lot of success in drafting wide receivers. Diontae Johnson is one of the latest examples, but a big reason why they drafted him was because of the late Darryl Drake.

“I know for a fact Tampa Bay was going to take him with their next pick,” Drake, then the team’s Receivers Coach, said at the time. He later said Bruce Arians cussed him out after the Steelers took Johnson, because Arians really wanted him.

Drake also spoke highly of Johnson after the team drafted him back in 2019.

Unfortunately, Drake never got to see Johnson play a game for the Steelers. On August 11, 2019, Drake passed away in Rooney Hall at Saint Vincent College. After his first preseason game (he missed the first game due to injury) and the first game after Drake’s death, Johnson talked about the connection he had with his coach.

“That was my guy when I first met him”, Johnson said in the locker room following the game, from 93.7 The Fan. “We clicked as soon as we met each other. After that, there was no separating us. He was with me here today. Every play.”

Since then, Johnson has emerged as the Steelers’ top wide receiver and just earned himself a second contract with the team.

Earlier today, Johnson posted a quote from Drake quote on his Instagram story: “Never choose good, when great is available.” That same quote was printed on wristband that Steelers receivers wore for years, and were made by former Steelers WR Donte Moncrief, per a story by PennLive’s Jacob Kingler.

Drake never got to see Johnson become the player he knew he would be. Johnson never got to see his first mentor in the NFL watch him play as he went through the highs and lows that come with an NFL career. They didn’t spend a lot of time together, but they made the most of the time they had.

On and off the field, Drake is likely a daily influence in Johnson’s life. As the only Steelers’ receiver who was coached by Drake, he’s also helping keep his memory and legacy alive.