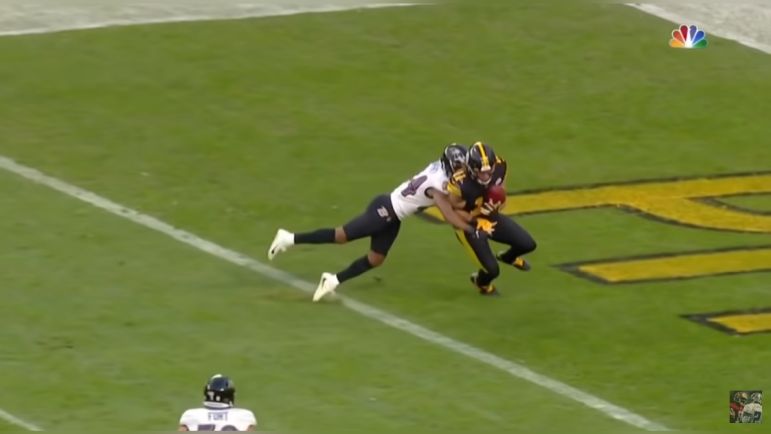 Chase Claypool may only been going into his third year but he’s played enough football to know the game’s top corners are. The guys over at I Am Athlete, Brandon Marshall and Maurice Jones-Drew, made a trip out of Steelers’ training camp and stopped by to chat with Chase Claypool, who they interviewed earlier in the offseason. At the end of their interview, Claypool was asked to rank the top four cornerbacks in the league.

“I haven’t been able to play all the corners, but in terms of what I see on tape and general consensus, I’m gonna say with his size and speed, Jalen Ramsey will be number one,” Claypool said. “Tre’Davious White’s real good, I enjoyed playing him. I think Marlon Humphrey should be up there. I play him twice a year and he does a good job. He’s smart. He’s a ballhawk.”

After mulling it over, Claypool named J.C. Jackson as his fourth-best corner. Jackson built up his career in New England before cashing in big with the Los Angeles Chargers this offseason. So to recap, here’s Claypool’s list.

A solid list of names overall. As Claypool alluded to, he’s seen White and Humphrey the most often, playing the Bills in 2020 and 2021 while obviously squaring off against the Ravens twice a season. Humphrey is known as one of the league’s most physical corners with a penchant for taking the ball away, forcing 12 fumbles over the last four years including a league-high eight of them in 2020. Three of those have been against the Steelers, including two in one game back in 2020, though neither came at Claypool’s expense.

Aside from again seeing the Ravens twice this season, Claypool will meet White’s Bills in Week 5. It’s unclear if White will play after suffering a torn ACL last season but current expectations are he’ll be ready “sooner than later” and may not even miss the start of the season.

Claypool attempted to litter Steelers’ corners on the list, mentioning Cam Sutton’s name before the I Am Athlete crew informed him that’s against the rule. If given the chance, Claypool likely would’ve mentioned Ahkello Witherspoon’s name too. Witherspoon has rare size and length for the position, legitimately almost 6’3, and he’s battled Steelers’ receivers throughout the summer. Pittsburgh will count on him to be the team’s best cover corner and stop some of the game’s best wideouts like Ja’Marr Chase, Stefon Diggs, and Tyreek Hill this year.