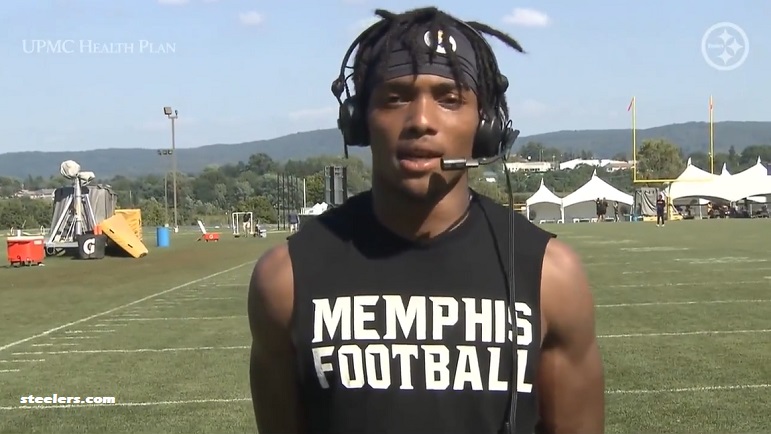 After drafting Georgia wide receiver George Pickens in the second round of the 2022 NFL draft, few expected the Pittsburgh Steelers to take another wide receiver in the remaining rounds. The Steelers, however, did just that by selecting a speedy wide receiver out of Memphis two picks later in Calvin Austin III. The two rookies enter a competitive Steelers’ receiving core, where they’ll have to battle for snaps with Chase Claypool, Cody White, Anthony Miller, Steven Sims, Miles Boykin, among others.

“To see us both contribute, it is a good thing,” Austin III said in an interview with Mike Prisuta on Steelers Live regarding his and fellow rookie Pickens performance in the two-minute drill in training camp. “We’re never lax or constantly just weighing on ‘oh yeah, we made a play’. It’s always onto the next play, we’re just kind of consistently make plays and be a big part of this offense.”

Unlike Pickens, Austin’s measurables are not typical for an NFL receiver. His 5’8”, 161-pound stature, as well as the depth that the Steelers have at the position, will make for a difficult battle for Austin to get consistent snaps right out of the chute.

Austin has a similar stature to Cleveland Browns wide receiver Jakeem Grant and Buffalo Bills wide receiver Isaiah McKenzie, both of whom are typically used as gadget players with limited snaps. In order for Austin to develop past this to a larger offensive role, he will indeed need a stellar camp performance with an “onto the next play” mentality.

Early reports out of training camp have been quite favorable and frequent when it comes to Austin and Pickens, specifically. In his Wednesday post-practice interview, Austin paid tribute to the coaching staff for helping him and the other wide receivers be more detail focused.

“You know, we have great individual coaches for each position,” Austin told Prisuta. “So, you know, it’s just about taking what they teach us in the class and putting it on the field because anytime that something doesn’t go our way, it’s not because of something that the defense did, it’s usually something that we have to fix, or something that we’ve been coached, and we’re just not detailed enough. So, even coach Frisman [Jackson], he’s just been on us about being detailed because that’s when the offense is flowing and cohesive is when all guys are focused and locked in on their details.”

In drafting two wide receivers with different sizes and skillsets this offseason, in addition to adding Miles Boykin, and resigning Anthony Miller, it’s clear that the Steelers were not satisfied with their 2021 depth at that position. Indeed, the Steelers had a hard time replacing receiver JuJu Smith-Schuster’s slot role last season, as receiver Ray-Ray McCloud did not produce adequately enough.

In revamping the position with new skillsets this past offseason, the Steelers are less likely to pay the price of poor depth in the event of an injury or two in 2022. The hope is that Austin’s 4.31-second 40-yard dash speed will now provide the Steelers with a skillset that they have lacked for several years: a deep-threat for the defense to respect and explosive playmaking ability.