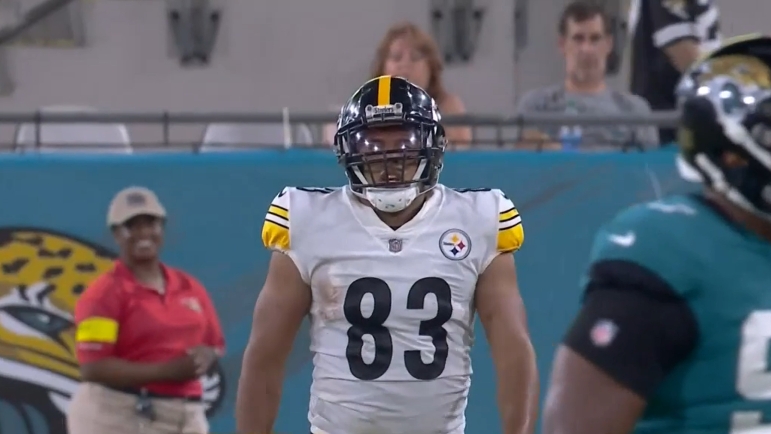 Explanation: It’s well known that the Steelers have not employed fullback Derek Watt on offense very much at all since signing him two years ago as one of the game’s very highest-paid players at his position, even if his primary function is as a special-teamer. The team has been using rookie H-back Connor Heyward as a tight end, but is now beginning to diversify his responsibilities, and has highlighted his receiving both in practice and during the preseason. But the team already has two other tight ends who play a good deal.

Just look at the way the Steelers have been using Heyward thus far during the preseason. Even training camp practice reports reveal a player whom the Steelers obviously have feelings about regarding his ability to contribute as a pass catcher.

And especially if and when Kenny Pickett starts, there’s going to be even more incentive to line Heyward up. He put Heyward on the field for a two-point conversion because he feels comfortable working with him.

As for Watt, what’s changed? If they were barely using him last year, there’s no reason to think that they will use him more this year. Indeed, now with a more blocking-friendly third tight end than they had last year, and with a more diverse skill tree, we could see more 13 personnel versus 22 personnel.

We’re talking about a late-round rookie special-teamer. It doesn’t matter a damn what name is on the back of his jersey in the regular season. You know who’s caught passes and played a lot in preseason games for the Steelers—albeit not this year, as he’s been injured; another reason Heyward has played as much as he has? Derek Watt.

Yes, the Steelers do things in the preseason that they end up not doing in the regular season. It doesn’t matter how they showcase Heyward now. They’re trying to see what he looks like. They already have Pat Freiermuth and Zach Gentry as their tight ends, and Heyward is not the backfield or move blocker that Watt is, at least not right now.

And they don’t need anybody to catch the ball that isn’t already out there. If they want to throw to a tight end, it’s going to Freiermuth. We already saw a couple of passes sail over the 6’0” Heyward’s reach. Throwing to an h-back is a novelty. If you’re throwing to a six-footer, he’s a wide receiver or a running back under 95 percent of circumstances.