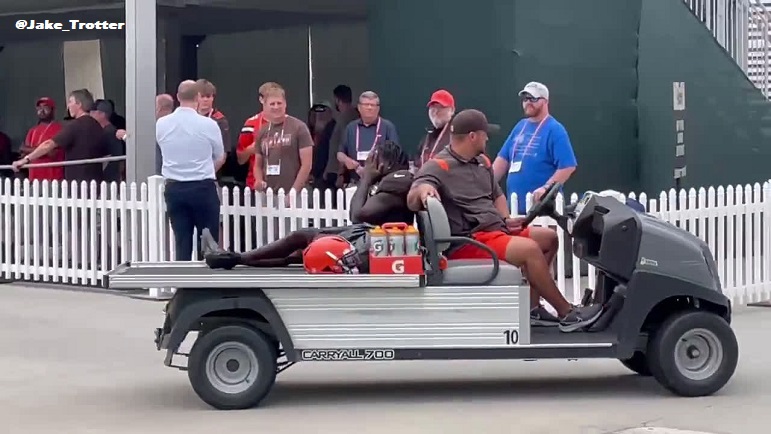 The Cleveland Browns seemingly lost a big weapon for the 2022 season on Tuesday as it appears as though wide receiver Jakeem Grant suffered a torn Achilles during the team’s afternoon practice.

“I really feel awful for Jakeem,” Browns head coach Kevin Stefanski said in a statement confirming an Achilles injury for Grant. “We’ve witnessed how hard the young man has worked since he got to our team. We all realize injuries are a part of our game, but that doesn’t make it any easier to accept especially for someone that works as hard and carries himself like Jakeem.”

According to video right after the injury occurred on Tuesday, Grant required a cart to help him off the practice field. Understandably, he seemed to be in some pain and quite upset.

Grant, who was originally selected by the Miami Dolphins in the sixth round (186th overall) of the 2016 NFL Draft out of Texas Tech, signed a three-year contract with the Browns earlier in the offseason. The deal was reportedly worth up to $13.8 million.

In his first six NFL seasons, Grant has registered 100 receptions for 1,140 yards and seven touchdowns to go along with 17 rushes for another 76 yards and one touchdown. He is regarded as one of the NFL’s better returners as he has 119 punts returned for 1,228 yards and four touchdowns and 110 kickoff returns for 2,699 yards and two touchdowns. Grant was a Pro Bowl selection as a returner for the first time in 2021.

Last season, the Dolphins traded Grant to the Chicago Bears ahead of the deadline for a 2023 sixth-round pick.