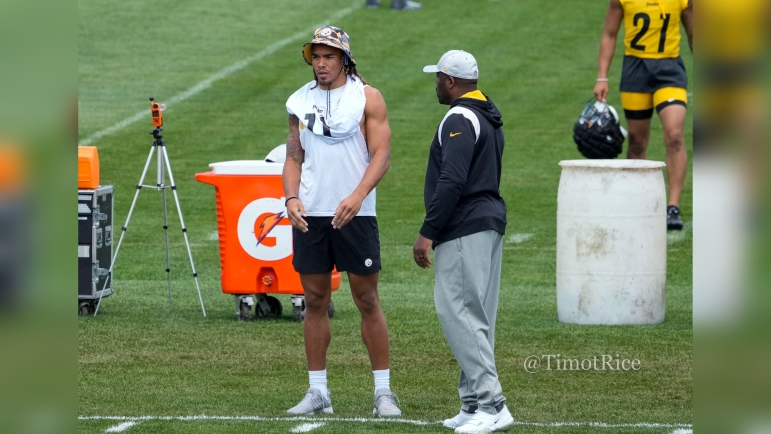 Sports at its best is a fraternity of peers, all of whom share a common love for the game and, while competitive, want to see everybody excel. It’s not uncommon to see great athletes, now retired, take it upon themselves to reach out and take a younger player under their wing when they see potential in him, and a way they can help.

That’s what Brandon Marshall has done for a number of younger wide receivers, and one such ‘pupil’ of sorts this offseason has been the Pittsburgh Steelers’ own Chase Claypool, going into his third season after a disappointing second year that did not live up to his rookie hype. The six-time Pro Bowler, who was at training camp yesterday, relayed the following anecdote about how they first got in contact this offseason, via audio played on 93.7 The Fan with Andrew Fillipponi and Chris Mueller yesterday:

We’re at the Super Bowl, and he had his cast on. He just had surgery, and I walked up to him, and I was just brutally honest with him. I said, ‘You have a lot of upside, you have huge upside, you’re super talented, but you’ve got to get your mind right. Lean into being more of a pro. Let’s learn how to do TikToks, when to do TikToks. How to deal with the media. That stuff matters’. And he looked at me and respected it and said, ‘Let’s work. I’m locked in this offseason’. So we’ve been able to work, and he’s had a tremendous offseason. His mind’s in the right place, and I’m excited for his team.

A second-round pick out of Notre Dame in 2020, Claypool came out firing as a rookie. He caught an 84-yard touchdown pass in the second game of the season, and then followed it up with a four-touchdown game two weeks later. Overall, he caught 62 passes for 873 yards and eight touchdowns—numbers he roughly replicated last season, minus a fourfold reduction in scoring.

While he was performing at a high level, Claypool also began to take the lead of teammate JuJu Smith-Schuster by ‘building his brand’ via a social media presence, something that he continued into the offseason and into last year.

But as his performance on the field did not match expectations, patience with his non-football activities began to grow thin for many outside observers, and clearly that’s something that even Marshall took note of, and is evidently something he’s discussed.

To his credit, Claypool has largely had a quiet offseason dedicated to getting better. The biggest ripple that he made was when he appeared on Marshall’s podcast and, when asked where he would rank himself, said that he believes he is a top-three wide receiver.

But I like confidence in my wide receivers, anyway, so I liked it from the jump, even if he did slightly walk back his comments, clarifying it in so many words to say that he believes he has the talent to be in the top three, but still has to prove it.