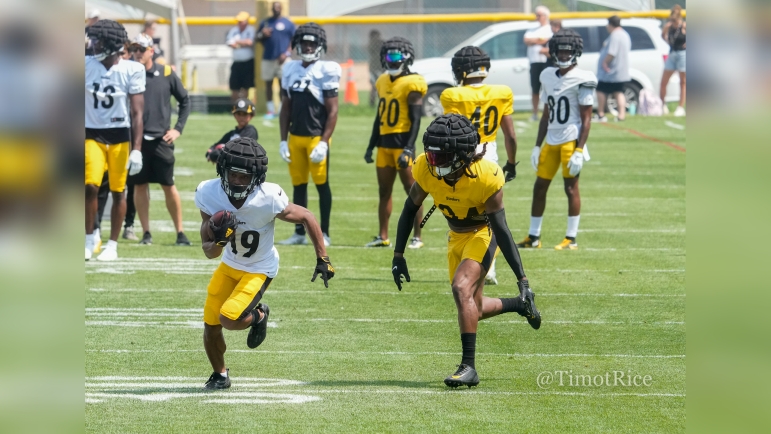 Reasoning: The rookie wide receiver entered the day with the task of answering the question of whether or not his elusiveness and speed, counters to his lack of height and size, would translate into padded football practices. The first day with pads proved to be a continuation of his successes without.

Whenever an NFL team drafts an ‘undersized’ player from the college ranks, it comes with some hesitation, no doubt. You can never be quite sure how his game will translate at the highest professional level, where almost everybody is an elite athlete and tremendously physically gifted.

Austin’s greatest assets are his speed and change of direction, and his knowledge of how to utilize those traits. They are easier to pull off on air, unencumbered. While it is no surprise that he was able to continue to see success on the practice field in a full football uniform, the fact of seeing it happen is still an important part of the professional evaluation process.

A fourth-round pick out of Memphis, Austin is listed at 5’9”, 162 pounds. He is the lightest player on the roster by a good margin, with Damontae Kazee and Tyler Snead, at least based on their listed weight, having a 12-pound advantage on him, though in Snead’s case, he’s even shorter at 5’7”.

But the rookie showed yesterday that he can still get open with the same level of effectiveness that we saw from him during the first week of training camp, which is exactly what he will need to continue to show in order to earn playing time later this year.

The Steelers have Diontae Johnson, Chase Claypool, and presumably rookie second-round draft pick George Pickens at the top of their wide receiver depth chart, and historically, they are not a team that does a lot of rotating.

So if Austin wants to get on the field, he’s going to really have to get the most out of the unique traits that he brings to the table, making the coaches covet his skillset. And he has to show that he can do that in any environment, whether that’s on Chuck Noll Field in just a jersey or inside of a stadium in a game that matters.