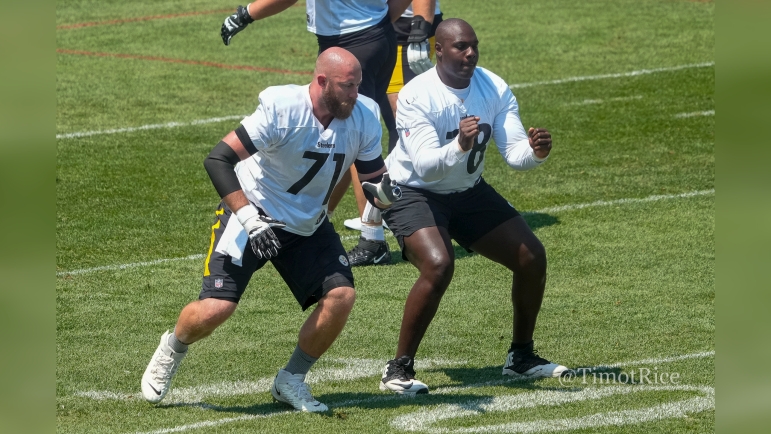 Reasoning: The veteran offensive lineman was a surprise cut yesterday as the Steelers whittled their way down to a 53-man roster. Also releasing Trent Scott, Pittsburgh acquired veteran Jesse Davis, who is more experienced and accomplished at guard, to presumably be their backup tackle, unless one of Haeg or Scott is brought back.

If I were to pick one move yesterday that surprised me the most, outside of the trades, which cannot be predicted, it would be the Steelers’ decision to release veteran offensive lineman Joe Haeg. Not that Haeg is some great diamond in the rough, but given the woeful state of the team’s tackle position, it was a hard pill to swallow.

He had been missing time due to a concussion, but returned to practice yesterday—and by the time he left the field, found out that he was cut. He even spoke to reporters about feeling confident that he will be ready for the first game of the season, so clearly this came to him as a surprise.

Was he released solely because they acquired Jesse Davis as a one-for-one trade? Or is this one of those roster situations where you have to juggle players in order to do what you need to do? The Steelers should be adding at least one player to the Reserve/Injured List today, and possibly more, so one or more players will be re-signed, accordingly, or added from the outside.

Another thing to consider is the wide receiver position, where they have seven, currently. That’s not going to last long. It could either be an indication that Calvin Austin III is going to wind up on the Reserve/Injured List (which I do not anticipate), or they are just seeing where Austin is healthwise before parting with Steven Sims. As a non-vested veteran, holding on to him and sparing him from the initial claims rush also makes it more likely that he can make it through and be re-signed to the practice squad (if he so chooses).

So, even with Haeg released yesterday, I’m not convinced necessarily that we have seen the last of him yet. Surely, somebody is going to be added to this roster who can play tackle, right? Even if the smart money is on Scott, perhaps, due to his connections with Pat Meyer.