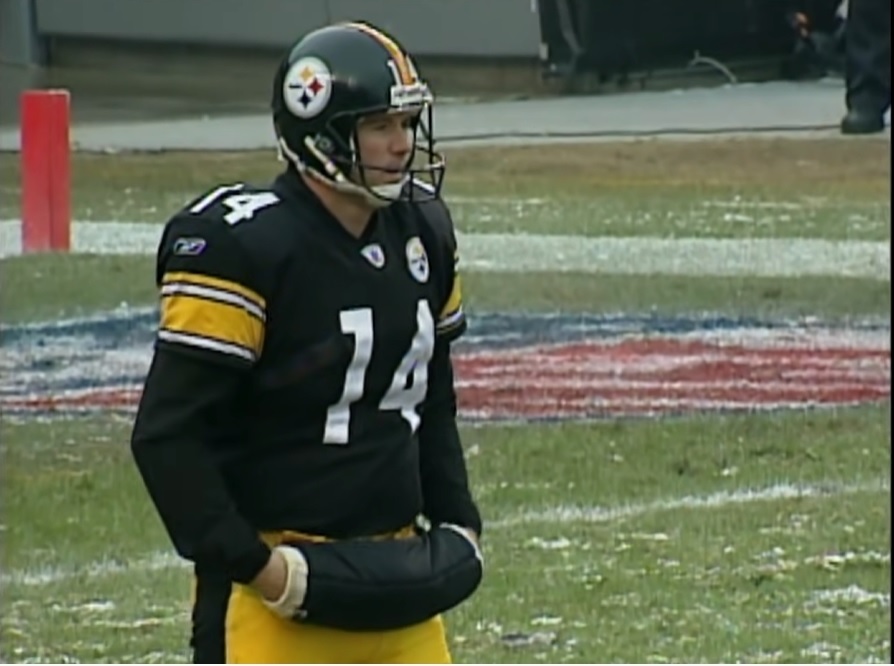 This one will be in a similar vein to our Blast From The Past types, but even more obscure than that. Well-known NFL players who were Steelers only for the briefest of times that it’s entirely forgettable. Our job will be to remind you.

Continuing today with a name I didn’t even realize was a Steeler – punter Tom Rouen.

Tip of the hat to Dave Bryan who suggested Rouen after seeing my initial article on Galloway. In terms of Steelers’ career, Rouen is less obscure in terms of actually seeing the field in Pittsburgh, unlike Galloway, but he called the Steelers home for just a fraction of his long career.

The bulk of Rouen’s (last name pronounced “ruin,” right up there with unfortunate specialist last names like Chris Blewitt) long and successful NFL career was spent in Denver. Colorado was home to him playing his college ball for both Colorado and Colorado State. After a stint in the World Football League for the Ohio Glory, he served as the Broncos’ punter as John Elway led the team to a pair of Super Bowls and was largely successful, including leading the league in punting in 1999 at 46.5 yards per punt. For context, compare that to today and a 46.5-yard average would rank middle of the pack, tying what Jordan Berry did this season, though Pittsburgh would love to see a number remotely close to that.

Rouen’s career and life was stable until 2002, his age 34 season. He served as Denver’s punter the first eight weeks but struggled, averaging under 43 yards per punt while having two attempts blocked. The Broncos replaced him with Micah Knorr, who turned out to be far worse.

For the first time, Rouen needed to find a new NFL team. The New York Giants signed him but dumped him after just three weeks, one of which he spent inactive. But just as the Giants let him go, an opening was created in Pittsburgh. The Steelers were chugging along just fine with Josh Miller until a degenerative bone condition, essentially arthritis in his shoulders, required surgery late in the year. He landed on IR and the team signed Rouen as his veteran replacement to come in on the fly. Three days after being signed, he was punting against Tampa Bay. Because we can, let’s take a look at his first Steelers’ punt, a 46-yard boot and 36-yard net.

He punted well the final two weeks, averaging 45+ yards in both games as the Steelers finished 10-5-1 to win the newly formed AFC North.

Rouen was the Steelers’ guy for their playoff push, a crazy comeback win over Cleveland before Joe Nedney’s award-winning flop as the Titans won in overtime. Rouen’s numbers looked bad, averaging 35.3 and 31.8 yards per try in the two games, but he punted in typical blustery winter conditions. Windy, chilly, below-freezing games in each contest.

Miller returned healthy for the 2003 season and Rouen’s services were no longer needed. He spent the next three years as Seattle’s starting punter and faced off against Pittsburgh in Super Bowl XL, averaging a healthy 50.2 yards in the loss. You can even check out his Super Bowl Media Day interview here. Poor Tom didn’t even get a booth or stand of his own and is followed up in this video by Tom Arnold which tells you all about the interest there was in talking to a guy like Rouen (Arnold also predicted the Seahawks to beat the Steelers, the coldest of takes).

Had he won that game, he would’ve become just the third punter in NFL history with three Super Bowl rings. Alas, only Ray Guy and Ryan Allen (the Patriots’ punter during their dynasty, you’re welcome for saving you time looking that up) remain the only two.

Rouen briefly competed with Andy Lee for the 49ers’ job in 2006 but lost out and retired.

He played 188 NFL regular season games. Only two of them came in Pittsburgh and just seven of his 810 career punts came with the team. The Steelers were a transitional period for him, one to keep his career going and not fall out of the league sitting on the street. The bridge between his Broncos and Seahawks’ career. Overall, a footnote but a name worth highlighting and one that fits perfectly for this series.