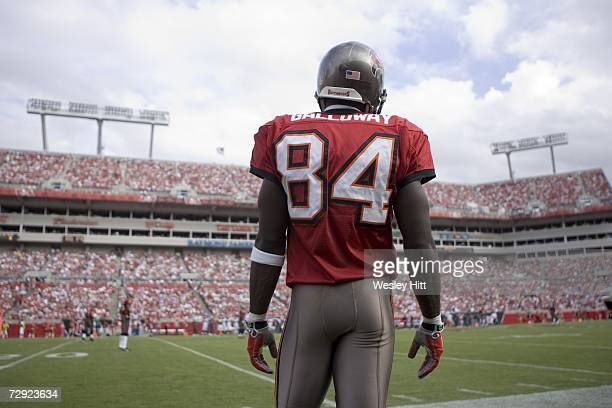 This one will be in a similar vein to our Blast From The Past types, but even more obscure than that. Well-known NFL players who were Steelers only for the briefest of times that it’s entirely forgettable. Our job will be to remind you. We’ll start things off with Joey Galloway who yes, was a Steeler.

Blink and you’ll miss his Steelers’ career. You can’t even fairly call it that. It’s like calling going through the Starbucks drive-thru your 9-5. It’s just something that happened for a moment and then it was over.

Entering the league as the eighth overall pick of the 1995 NFL Draft, Galloway was 38 when he signed with the Steelers in 2009. It came late in the season and only after Limas Sweed was placed on the Reserve/Non-Football Illness list. It came at the same time the team lost veteran long snapper Greg Warren for the season with a freak torn ACL on the game-winning extra point to beat the Green Bay Packers. You remember the game, Ben Roethlisberger with the buzzer-beater touchdown to Mike Wallace. In Warren’s place stepped in former furniture-mover Jared Retkofsky. Galloway’s move received minimal buzz at the time, though this ESPN article says Tomlin and the Steelers had interest in Galloway for months.

“Pittsburgh was interested in signing Galloway during the offseason, but he chose New England instead. Galloway, 38, grew up in Bellaire, Ohio, which is 60 miles from Pittsburgh.”

When Galloway signed, the Steelers were slumping, falling from 6-2 to 7-7, flipping from division leader to desperate playoff push. They’d make that late-season push, winning their final two (technically their final three, they won that Packers game right before Galloway was brought in) but still lost a Wild Card spot to the New York Jets and Baltimore Ravens.

But Galloway didn’t help further the cause. He was on the 53-man roster but inactive the final two weeks. For fun, here’s a look back – thanks to Dave Bryan – at the other inactives for the Week 17 finale against Miami in 2009-2010.

Gotta be honest. I have no idea who Trae Williams is. Maybe he should be the next topic of this article.

At nearly the end of his career, Galloway wasn’t re-signed after the season. I’m guessing he didn’t have a ton of interest in doing so. His NFL days weren’t quite down and he finished things out in 2010 with Washington, catching 12 passes for 173 yards over ten games. He’s one of just three wide receivers in NFL history to catch at least five passes in an age 39 season or older joining two legends in Jerry Rice and Charlie Joiner. Galloway wasn’t quite that caliber of player but he was a good one blessed with ridiculous speed (a sub-4.3 40 with some outlets reporting a sub-4.2 time) who finished his career with over 700 receptions and nearly 11,000 yards. He’s the seventh leading receiver in franchise history for both the Buccaneers and Seahawks. Which is pretty wild. A quick investigation couldn’t find any other player who has done that but I have to think there’s others out there (Update: been told Derrek Mason is one other).

His official stat line with the Steelers were big goose eggs. I can’t even find a photo of the dude in a Pittsburgh uniform, though I assume it’s out there in some corner of the Internet archives. But he was a Steeler for about two weeks. Two weeks more than most anybody else will be.