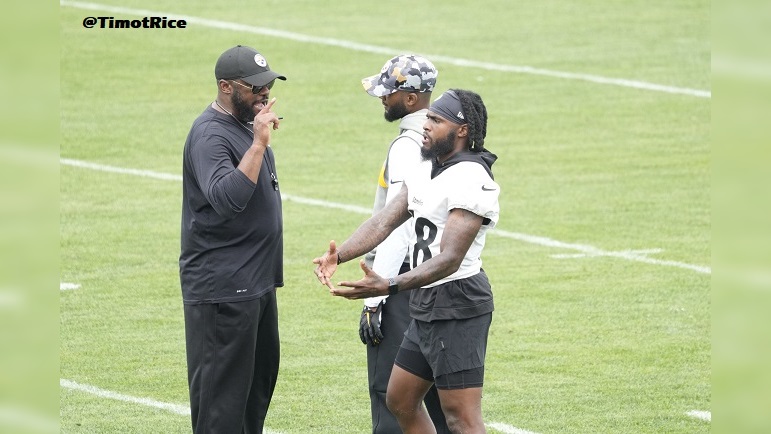 The Pittsburgh Steelers’ first training camp practice of 2022 is now underway, and it looks like wide receiver Diontae Johnson has possibly started some sort of hold-in at Saint Vincent College in Latrobe as it relates to his current contract situation.

According to Josh Carney and Alex Kozora on Wednesday, Johnson is not practicing in team drills after he went through a 20-minute warmup session catching balls like he always has with just one drop. He’s out there in a cut-off Steelers hoodie with no helmet.

Diontae Johnson helmet-less and holding a play sheet on the sideline pic.twitter.com/t51BtqFucr

Prior to Wednesdays first training camp practice of 2022, Johnson talked to the media and indicated that he was unsure if he would practice later in the day.

“We’ll see, we’ll see how that goes,” Johnson said during his media session. “Just up to coach T [Mike Tomlin] and whatnot.”

On Tuesday, Steelers head coach Mike Tomlin was essentially asked if he thought Johnson would partake in some sort of camp hold-in similar to the one outside linebacker T.J. Watt did last year during training camp.

“I’m not proceeding with any anticipation of any of those type of things, man,” Tomlin said. “He was here on time and did a heck of a job at the conditioning test like everyone else, so we keep moving forward.”

Johnson was asked if he talked to Watt about his situation earlier in the day.

“I talked to him pretty much every day,” Johnson said. “Him and Minkah [Fitzpatrick], you know, because I talked to Cam [Heyward] a little bit because they all have been through the situation.

So, seeing how those guys have handled that situation, does that give Johnson a little bit more confidence as the process goes on?

“Oh yeah, for sure, because I know what to expect and know how to handle it,” Johnson said. “I can’t take stuff personal; you know because it’s business at the end of the day. That’s what I’m learning slowly. Sometimes, you know, it’s just like with anything, stuff gets frustrating and it’s just how you respond to it. But I’m not letting that derail me at all. So, I’m just gonna keep going and worrying about the right things.”

While it doesn’t sound like as contract extension this summer is imminent for Johnson, he made it clear on Wednesday that his hope is to remain with the Steelers long-term.

Judging by early reports from Wednesday’s training camp practice, that “doing” sounds like it might be a continued training camp hold-in. Stay tuned.

Tomlin was asked about Johnson not working in the team portion of Wednesday’s practice after the session had ended.

“I acknowledge that he was less than a 100% participant [today],” Tomlin said. “We’ll continue to manage the circumstance, but right now my energy and focus is on those that are participating and I think that’s the appropriate mindset to have. From time to time when you get in a setting like this, you manage situations or circumstances and people, but largely my energy is devoted to those that are working and the larger body. And that’s where I’m at with it.”