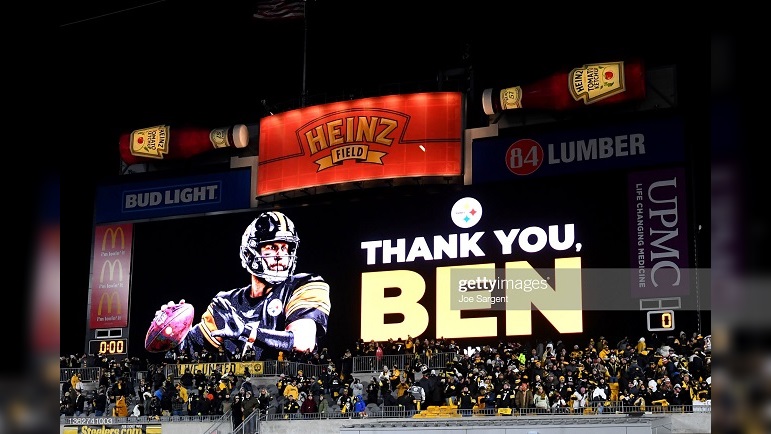 Are you still in shock that Heinz Field is no more? Well you’re not alone, as former Pittsburgh Steelers quarterback Ben Roethlisberger is still attempting to get over the Monday news that Heinz Field will now officially be known as Acrisure Stadium moving forward. Roethlisberger posted his thoughts about the name change on his Twitter account on Monday afternoon.

I can't believe it, it doesn't seem right or real! Home will always be Heinz Field! I will never forget the last game, and all the amazing fans at FOREVER HEINZ! — Ben.#ForeverHeinz

“I can’t believe it, it doesn’t seem right or real! Home will always be Heinz Field! I will never forget the last game, and all the amazing fans at FOREVER HEINZ!” — Ben. #ForeverHeinz

Roethlisberger’s last game at the place formerly known as Heinz Field took place in Week 17 last season. It was a Monday night game on January 3, 2022, against the Cleveland Browns. The Steelers won that game 26-14, with Roethlisberger completing 24 of his 46 total pass attempts for 123 yards with one touchdown and one interception. His last touchdown pass at Heinz Field went to wide receiver Diontae Johnson with 10:39 left in the second quarter.

Fortunately, Roethlisberger got to end his last game at Heinz Field with one final kneel down with 10 seconds left. That came on the heels of Steelers safety Tre Norwood intercepting a pass from Browns quarterback Baker Mayfield one play earlier. Roethlisberger’s kneel-down was followed by an epic and long send-off from the 63,624 in attendance.

Another look at the final kneel down at Heinz Field for Ben Roethlisberger #Steelers pic.twitter.com/koJUAR12aX

Roethlisberger’s first game played in at Heinz Field took place on October 3, 2004, against the Cincinnati Bengals. The Steelers won that game 28-17. He went 7-0 in the games he started at Heinz Field during his rookie season. His first loss at Heinz Field came in the 2004 AFC Championship game against the New England Patriots after beating the New York Jets a week earlier in the Divisional Round at the venue.

Known as Heinz Field since it opened in 2001, the Steelers’ home stadium will now be known as Acrisure Stadium beginning this season and for 15 in total. Acrisure operates as a top-10 global insurance broker and has reportedly grown its revenue to more than $3.8 billion in just over eight years.