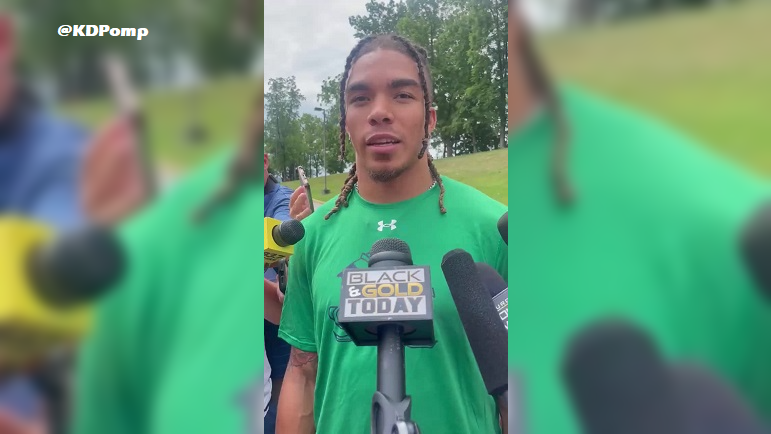 Throughout much of the offseason ahead of his third season in the NFL, Pittsburgh Steelers’ wide receiver Chase Claypool has remained rather bullish on the upcoming 2022 season, not only individually, but for the black and gold overall.

Claypool not only called himself a top-three wide receiver in the NFL, but stated that the Steelers should be a playoff team this season, raising some eyebrows not only within the fanbase, but from the national media’s perspective as well.

Chase Claypool is bullish on this season both individually and collectively #Steelers ⁦@KDKA⁩ pic.twitter.com/D19n06aKbI

Arriving at his first Steelers’ training camp at Saint Vincent College Tuesday morning — third training camp overall — Claypool remains bullish on his season ahead, stating to assembled reporters that he believes in the preparation he’s put in this offseason, and learned a great deal from his struggles throughout the 2021 season that led to a productive offseason overall for him.

“I just think…compared to what I’ve done in prior years, after my first year to what I did this year, in terms of preparation training and studying film and all that, it’s 10 times more than what I’ve done,” Claypool said to reporters Tuesday, according to video via KDKA-TV’s Bob Pompeani, who posted video of Claypool’s interview on his Twitter feed. “I was pretty naive before in the past to think that I can repeat success without preparation. So I’ve really taken that preparation the next step.”

That follows along with the development that Claypool has really matured and grown as a person and a player from last season to the start of training camp this season. Coming off of a rockstar rookie season that saw him score 11 touchdowns and really burst onto the scene as a legitimate star-caliber weapon in the black and gold, Claypool rocketed back to Earth in a trying second season, featuring plenty of struggles throughout the season.

Ahead of his third season, Claypool knew he had to change something. Knowing that, he leaned on former 12-year NFL veteran Brandon Marshall for guidance this offseason. Having Marshall, who played for six teams over 12 seasons, serving as his mentor helped Claypool prepare for a big third season ahead, one that will be pivotal in his future with the black and gold.

“I’ve been using Brandon Marshall as a mentor, and I’ve been using his coach that coached him throughout his years in the NFL and college,” Claypool said to reporters Tuesday, according to video via KDKA-TV’s Bob Pompeani, who posted video of Claypool’s interview on his Twitter feed. “So I flew his coach out. We got a lot board work done and I kind of just had like a football retreat at my house. I went up to Florida, trained with him and saw his facility and just got a lot of nuggets that I could use in the season.”

Based on the work Claypool has put in throughout the offseason, and the growth he’s shown after a difficult second season, the third-year receiver could be in for a big bounce back campaign in 2022, emerging as that standout weapon offensively that the Steelers need on the outside opposite Diontae Johnson.