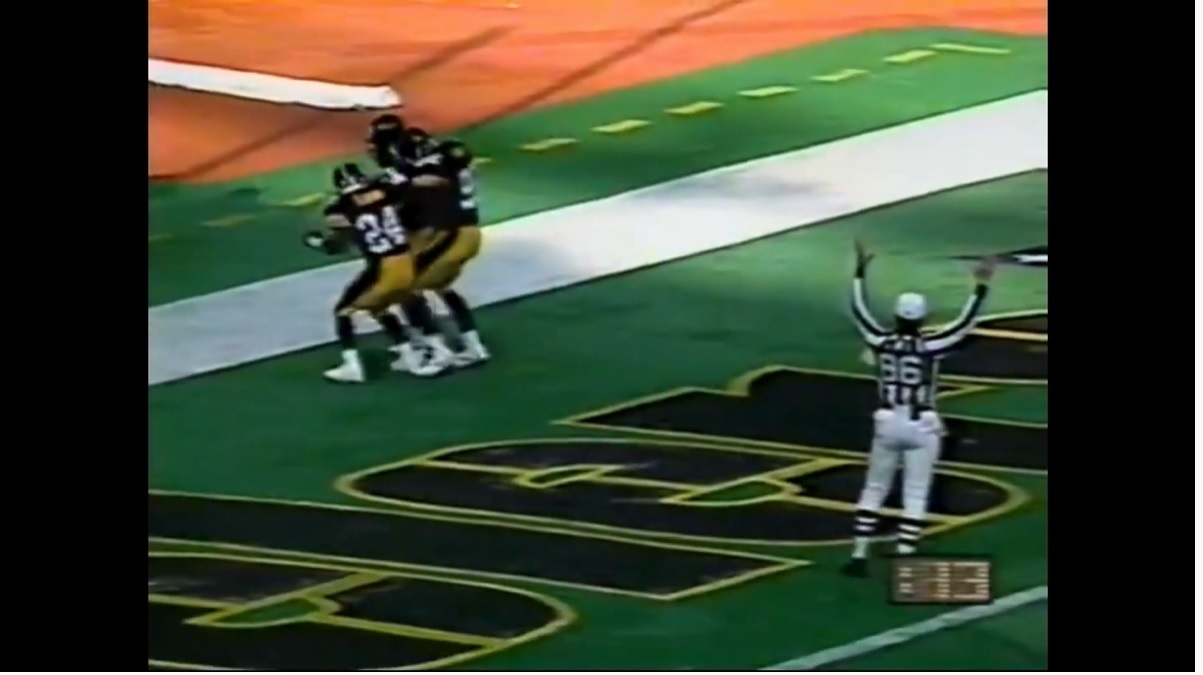 Ah yes, 1995. A time when you could play the New England Patriots and not get crushed by Day 3 draft pick, multi-Super Bowl winning champion quarterback.

Starting that day in 1995 was not Tom Brady. It was the man who would be replaced by Brady, Drew Bledsoe. Though it wasn’t #12, Bledsoe still carved up Pittsburgh throwing the ball an absurdly high 60 times (no QB threw more passes in a game that year) for 336 yards and three touchdowns. But the Steelers had the last laugh and won the game in its final moments, 41-24. The reason? Turnovers. Pittsburgh won the turnover battle 3-1 and right before halftime, the Steelers cashed in in a big way.

After Neil O’Donnell found Yancy Thigpen for a go-ahead score, Bledsoe and the Pats tried to put together a late-half drive. But Ray Seals shut the door, stripping Bledsoe as he attempted to elude the rush. The ball bounced left and Buckner scooped it up, big #96 rumbling down the right side untouched and into the end zone, complete with a 7.5/10 touchdown dance with Chris Oldham and Jason Gildon. And hey, credit to Buckner, he actually looked pretty light on his feet.

Here’s a clip of the moment.

Pittsburgh went up 17-6 and though Bledsoe tried to close the gap, the Steelers’ offense had the spark it needed. 24 second half points and all 41 of their tallies coming after the first quarter, though they got another defensive score when Oldham recovered a bouncing fumble for the second scoop-and-score of the day. This time, he was the main act of the end zone celebration.

It was the only touchdown in Buckner’s 174-game career but for a defensive lineman, one is plenty. Coming in a victory is that much sweeter. It’s hard to talk about your one shining moment in an ugly defeat. And so the Steelers beat the Pats. And as you all know, never ever lost to them ever again.