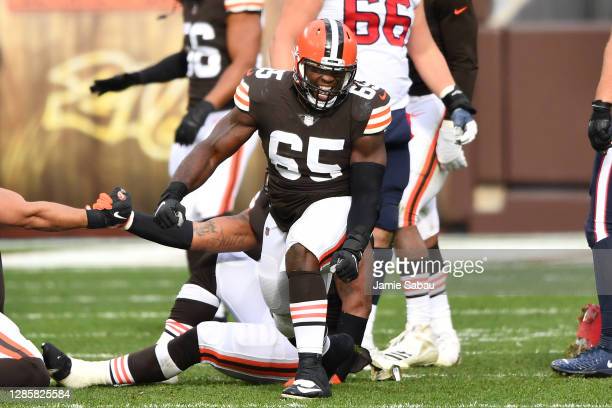 Shortly after the Pittsburgh Steelers signed FA DL Larry Ogunjobi to a one-year deal to shore up the defensive line, several members of the media as well as stats gurus immediately went to Pro Football Focus to get a feel for the player Pittsburgh was bringing in. To their chagrin, Ogunjobi was given a 34.7 run defense grade by PFF, an objectively terrible grade that has led many to believe the narrative is that Ogunjobi sucks against the run.

Here at Steelers Depot, we want to provide an objective deep dive for Ogunjobi, specifically for his run defense. I have taken the liberty to break down his best game, his worst game, and a middle of the road game from a PFF grade perspective to see the real issues they may have with his play in these contests and why they gave him such a poor grade overall. After breaking down the tape, I will provide an overall conclusion on whether the grade PFF gave Ogunjobi is justified or not. So, buckle your seatbelts, kids. Here we go.

When you pop in the tape on Ogunjobi’s run defense snaps in this matchup, you can easily see why PFF gave him his best grade in this contest. He was all over the field making plays for the Bengals front, showing off his first-step quickness and pursuit of the football. Here on this rep, we watch Ogunjobi line up outside shad of RG #70 Kevin Zeitler and does a good job getting his right hand into the blocker’s shoulder, holding the gap and fights through the block as #17 Le’Veon Bell approaches the LOS to make the assisted tackle for minimal gain.

On this rep against the LG #72 Ben Powers, we see Ogunjobi pull the blocker down who attempts to go low on him, keeping his shoulder square to the play and works laterally down the LOS to make the tackle on #34 Ty’Son Williams.

On this designed QB keepers by #8 Lamar Jackson, we notice Ogunjobi start flowing downhill with the rest of the defense with the blocking scheme, opening up a wide running lane in his gap. Still, Ogunjobi manages to counter back after fighting off the block to make the play on Jackson, tackling him for a small gain on the play.

On this goal line stand in the red zone, we see Ogunjobi do a good job again flowing laterally down the LOS and work across the face of the blocker across from him to get into the opposite A-gap to get in on the stop of the runner, keeping him from crossing the plane.

This play best encapsulates Ogunjobi’s motor as a defender when it’s running hot. Notice how Jackson drops back to pass, steps up in the pocket, then decides to tuck and run to the left sideline. Ogunjobi gets off the block of the center and busts it to the sideline in attempt to cut off Jackson. He ends up tripping up Jackson just enough on the diving tackle attempt with help from the other defender on the scene to bring him down. He doesn’t directly make the tackle here, but overall great effort from Ogunjobi to get in on the play.

One thing that I realized while watching the tape as to why PFF gave Ogunjobi a poor grade in this game was due to his tackling as Dave Bryan has pointed out on The Terrible Podcast. Here is one example against the Chiefs where we see Ogunjobi win with quickness of the snap, blowing right past #62 Joe Thuney into the backfield. Still, while Ogunjobi beats the block, he isn’t in great position to make the tackle with the runner outside of his framework. He reaches out with his left arm to grab him, leaving his feet to try and bring him down. He misses his initial tackle attempt, but latches onto the runner’s legs when he gets stood up, eventually bring him down.

Here is another example of a missed tackle attempt against the Chiefs where Ogunjobi engages the LG on the snap of the ball. Once the runner bounces the play out to his outside shoulder, Ogunjobi sheds the block in attempt to make the tackle. However, the guard trips Ogunjobi up as he falls to the ground, causing Ogunjobi to lose his footing as reaches out to tray and take down #31 Darrel Williams, narrowly missing the tackle as he falls to the ground and Williams rumbles forward for the first down.

One thing that stuck out as another reason why Ogunjobi may get dinged by PFF is his nature as a run defender. Ogunjobi has described himself as a gap penetrating defender that wins with first step quickness to get into the backfield and cause chaos. Still, this play style can get you in trouble sometimes like we see on this carry by #40 Derrick Gore. Ogunjobi swims over the inside shoulder of the LG and attempts to fight through the block of the center on the outside zone run. While he collapses the initial gap Gore is running to, a wide running lane opens between the center and RG that Gore cuts back into, getting into the second level where there is no LB help.

However, the Kansas City game also had some good moments as well for Ogunjobi from a run defense perspective. Here is a highlight that has been floating around the Twitter machine of Ogunjobi getting a big stop on first down on the goal line, getting a strong punch on RG #65 Trey Smith on the snap and long arms him to extend the blocker away from his frame. Ogunjobi then makes the play on #87 Travis Kelce on the keep, tackling him in the backfield for a loss on the play.

PFF gave Ogunjobi a run defense grade of 27.7 in Week 13 against the Los Angeles Chargers, his worst of the 2021 season. Ogunjobi’s tackling grade came out better though at 69.2.

When watching Ogunjobi in his worst-graded game of the season against the run, a couple of issues stood out as to why PFF gave him such a poor grade. The first issue is his leverage at the point of attack. While Ogunjobi can be quick off the snap, he tends to stand up too high on occasion, exposing himself to getting pushed backward by the opposing offensive line. Here are a couple of clips against the Chargers where Ogunjobi gets too high off the snap, needing to play with better leverage and hip/knee bend to hold his spot

Along with playing with poor pad level, Ogunjobi also struggled to consistently get off blocks in this contest compared to other games to prevent extra yardage being gained on the ground. Here is one example where Ogunjobi gets hands-on the RT on the snap, but doesn’t manage to fight across the blocker’s face, not being able to fight off the block until the runner is past him.

Here is a similar example on a QB keep by #10 Justin Herbert. Ogunjobi starts to work laterally across the LOS on LG #71 Matt Feiler, but Herbert exploits Ogunjobi being covered up, going to the space where Ogunjobi was as he escapes the pocket and picks up yardage with his legs.

Still, while Ogunjobi graded out terribly for his performance in this contest, there are still moments where he made plays. Here on this zone run to the right, the back cuts back to the left as the defense starts flowing to the play. However, Ogunjobi manages to fight through the block of #70 Rashawn Slater and wrap up the runner who tries to run past him. Taking him down for little-to-no gain.

So, is Larry Ogunjobi objectively terrible against the run like his PFF run defense grade suggests? I would say that while he has some faults, namely his missed tackle attempts and lack of consistent leverage at the point of attack, the perception that he flat-out sucks as a run defender is a little overblown. Sure, I do agree that Ogunjobi needs to be more consistent at getting ballcarriers to the ground and hold his own better with more sound gap integrity/anchor, but a lot of the plays above need to be taken into context.

A couple of his missed tackles occurred when he was out of position getting off a block, and some of the plays where he lost leverage, he took a double team to free up other defenders who failed to make a play. I would like to see better leverage overall but given his style as a gap penetrator as well as his strengths of winning with first step quickness, I understand why Ogunjobi was out of position on some of these plays, hence believing that PFF’s final run defense grade on him may not paint a clear picture.

Ogunjobi does show some good traits as a run defender like his ability to win with quickness off the snap as mentioned as well as his ability to work off blocks into gaps and his motor in pursuit of the ball. He is a good athlete for the position he plays and objectively brings more as a run-and-chase defender then some of the other defensive linemen on the roster.

I may have been a little off projecting Ogunjobi to be able to play the nose tackle role with Alualu on a consistent basis, but I do think he can see time there with more consistent leverage. Remember, it all comes down to what Ogunjobi is asked to do, as he was allowed to be more of a gap penetrator in Cincinnati than he was in Cleveland where he was asked to occupy blocks. In Pittsburgh, we should expect to see Ogunjobi continue to be allowed to penetrate gaps like the Defensive line has done recently, but also be asked to man gaps at times to allow the linebackers to run free to the ball to make plays.

I am keeping an open mind to Ogunjobi as a run defender heading into 2022 and his first season in a Steelers uniform. I don’t think he’s a world-beater as a run defender, but I also don’t think he’s this complete liability against the run that PFF paints him out to be. If he can contribute to a defense that finished dead-last against the run last season with some splash plays in the backfield as well as limit the plays where he gets caught with bad leverage or poor tackling, Ogunjobi should be considered a solid addition to Pittsburgh’s defensive front.

What are your thoughts on Larry Ogunjobi’s run defense? Do you follow the narrative that he is a bad run defender, or do you think the tape tells a different story? How do you think he will fare in Pittsburgh’s defense, and will he help the run defense in 2022? Please leave your thoughts in the comments section below and thanks again for reading!