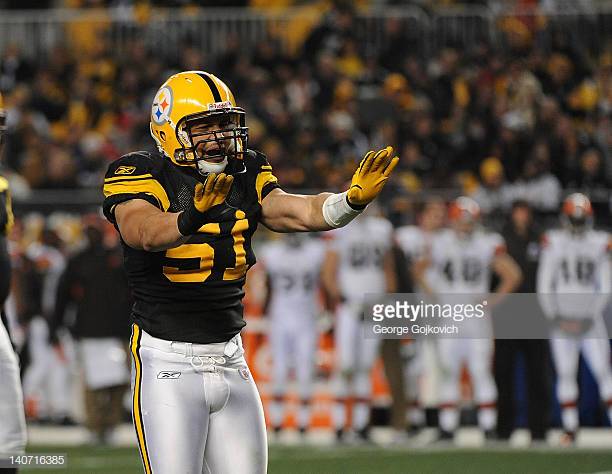 Farrior is one of Colbert’s top two picks and arguably his best, right up there with Ryan Clark. What makes Farrior even more interesting is the fact this was an early example of the Steelers being able to maximize a player’s skillset by changing his role. Nearly two decades before they did the same with Minkah Fitzpatrick, Farrior was a middling former first-round pick of the Jets, tasked to play outside linebacker and rush off the edge. It didn’t work. Over five seasons in New York he had just 5.5 sacks, and the Jets wanted no part of him following the 2001 season.

With Pittsburgh as his only offer, he signed with Pittsburgh for 2002 and transitioned inside. He’d later say that was the best thing for his career, feeling far more comfortable with a better view of the action.

“Once I moved to inside, I felt like I was a better player when I could see what was going on and react from that, instead of just having to be right now (snaps fingers),” Farrior said in February. “I think moving back a little bit and giving me time to process things helped me out a lot. …I feel like having me in space and having me off the ball helped me out tremendously.”

He immediately became a full-time starter, appearing in 14 games with the Steelers in 2002 and finishing with 82 tackles. Farrior kicked things up a notch in 2003, leading the team and ranking eighth in the NFL with 141 combined tackles. But 2004 is when his career really began to round into form and the splash plays followed. 95 tackles with four interceptions, three sacks, and three forced fumbles as Pittsburgh had the NFL’s best defense. Farrior earned a Pro Bowl berth and All-Pro selection for his efforts.

He was in the middle of the Steelers’ defense as they won Super Bowl XL. He had a great playoff run, racking up 22 tackles, three pass deflections, 2.5 sacks (both in the upset win over Indy) and a pick across those four games.

Farrior was a team leader on an elite defense with his great football IQ, physicality, and toughness. I mean, just look at this kind of punishment. That was Steelers’ football.

Farrior had a second Pro Bowl year in 2008 as he and the Steelers won their second Super Bowl of the decade. Again, he was excellent during the run, recording 27 tackles over three games.

He spent a full decade in Pittsburgh, totaling 154 starts. Over that time, he put up 1085 tackles and 30 sacks. Since combined tackles have been tracked, Farrior paces the field with his 1085 tackles, the only Steeler in four-digits and more than 100 ahead of second place in Lawrence Timmons.

Since 2000, Farrior is just one of seven players with 1000+ tackles and 30+ sacks, joining names like London Fletcher, Karlos Dansby, Brian Urlacher, and also Timmons, who crossed the 1000 mark with Miami. Farrior signed two more contracts in Pittsburgh before being released after the 2011 and his age-36 season. Pittsburgh saw something in Farrior the rest of the league didn’t, and reaped the rewards for doing so.