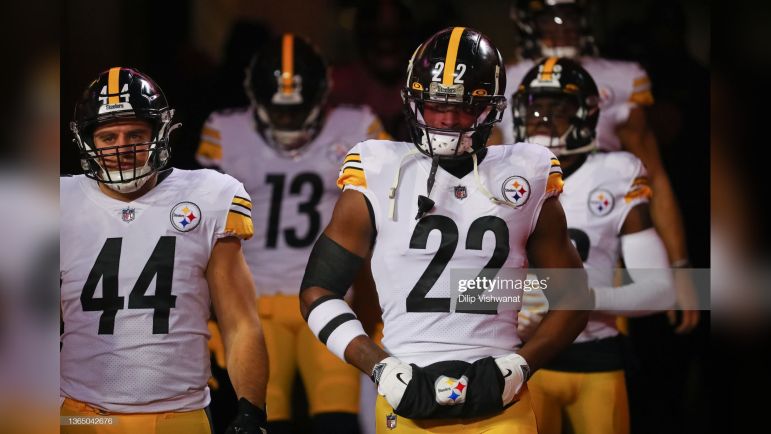 Making a guest appearance on All Things Covered podcast with Patrick Peterson & Bryant McFadden, Pittsburgh Steelers RB Najee Harris spoke with the former Pittsburgh Steelers defensive back about several topics ranging from his upcoming workload in 2022, the much-anticipated QB competition, and more.

When McFadden asked Harris how he was able to make such a prominent jump from the college game to the NFL after spending the first few seasons with the Crimson Tide as a rotational back, Harris told McFadden it was far more than the Alabama program or playing in the SEC that prepared him to make the impact he did in his rookie season with the Steelers.

“I don’t think you can, you can say college did that,” Harris said on the All Things Covered which also aired on the podcast’s YouTube channel. “I think at the end of the day, it, it comes down to the player. It’s how much the player wants to be good. It’s how much will does a player have, you know? Does this player want to be that type of guy? Cause there’s a lot of guys who had the same thing in college and they didn’t translate to the NFL. Just cause of the fact that I guess. I don’t think it’s so much organizations; it just comes down to the player at the end of the day. It’s how good you want to be. So, you know, Alabama shaped me a lot in ways that I learned more of the Xs and Os of football and blocking and how important blocking is for running back.”

Najee Harris made sure to give credit where credit is due to his former coaching staff at the University of Alabama who helped him become the football player he is now in the NFL. Whether it be work in the meeting room watching film, working with the strength and conditioning department, the athletic training staff, or the sports nutrition staff to get his body right and functioning at peak performance levels for the season and withstand a heavy workload, Harris has had plenty of people in his corner supporting him as he became a prominent running back in college football and the eventual first-round pick of the Pittsburgh Steelers in the 2021 NFL Draft.

Najee Harris: “Really taking care of the body is important. I’m actually reading a book called ‘Five Rings’ by Miyamoto Musashi. He talks about how taking care of your body is really important for a warrior. That’s helped out a lot.” #Steelers #NFL

Still, Harris makes a good point that the success of a player at the end of the day comes down to that intrinsic motivation within and that desire to be great. There is a long-standing saying that goes, “You can lead a horse to water, but you can’t make him drink.” That saying holds true here as Harris maximized all the opportunities and resources at his disposal, truly becoming a disciple of the game and committing to the daily disciplines needed to be successful.

His coaches and teammates at the NFL level have acknowledged as such, saying that he spends numerous hours in the facility watching film and getting recovery work to feel prepared. RB coach Eddie Faulkner and OC Matt Canada have even encouraged Harris to go home at times because he is so obsessed with the process.

This obsessive work ethic has been what sets Harris apart from other players that have come out of college to the NFL. While other Alabama running backs like Trent Richardson and Eddie Lacy came out as highly touted prospects, both fizzled out due to different reasons, whether it be Richardson’s lack of vision or Lacy’s lack of control to keep his weight down. Harris looks to keep that bust label far from himself as he constantly looks in the mirror and how he can personally improve as a player coming off a strong rookie campaign heading into Year Two with the Steelers.

“So, for me to do that and for me to go to NFL and they place that burden on me to be the guy and to be the vocal point of the offense? I appreciate that, man,” Harris said.