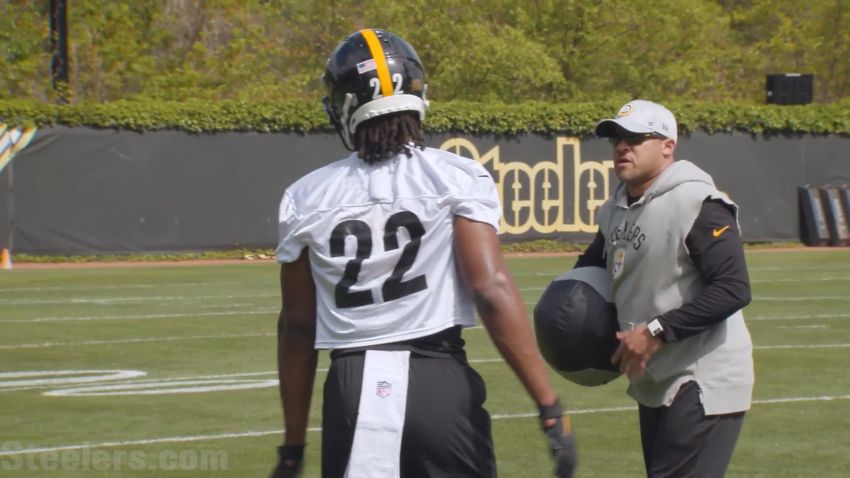 For many fans, it seems as though the only thing they want the players on their favorite teams to do is to eat, sleep, and breathe football. New Pittsburgh Steelers running back Najee Harris has been doing his best to try to oblige that, but, outside of his work in the community, it’s been his running backs coach who has been his biggest impediment.

Quarterback Ben Roethlisberger joked earlier during OTAs that Harris is such a hard worker that sometimes his coach has to tell him to go home. Only, he was half joking about that. As Eddie Faulkner confirmed earlier today, he did say that, and with good reason.

“It is true. Number one, and let me tell you why it’s true because I’m for all the hard work and the extra”, he began. “I’m all here for that. I love it. But he also has to learn, part of Najee and getting to know Najee in the draft processes, he also has to learn how to give himself breaks, too”.

“He works his butt off, and sometimes it’s a reward like, ‘Hey man, go home, relax, watch TV, do something different than the football’”, he continued. “So with him, being the kind of guy he is and so engaged and always after it and always wanting to do drills and always wanting to be developed, sometimes I’m trying to help teach him — sometimes you gotta take a deep breath. So, yes, that is true”.

The first round pick out of Alabama has readily established himself as the sort of player who will do everything in his power to ensure that he is the best version of himself for his team, showing such characteristics not only while he was in school, but even during the pre-draft process.

With James Conner now gone, he is already established as their bell-cow back, and much will be demanded of him from the word go, but one can easily deduce that he would be putting in the same amount of work whether that was the expectation going into his rookie season or not.

Harris also spoke to reporters earlier this offseason, and one thing he observed is that he has more free time now than he did at Alabama—almost too much time. I have no doubt that it won’t be too long before he begins to see that differently, and learns the importance of giving himself a break, as part of the process of being his best self on and off the field.