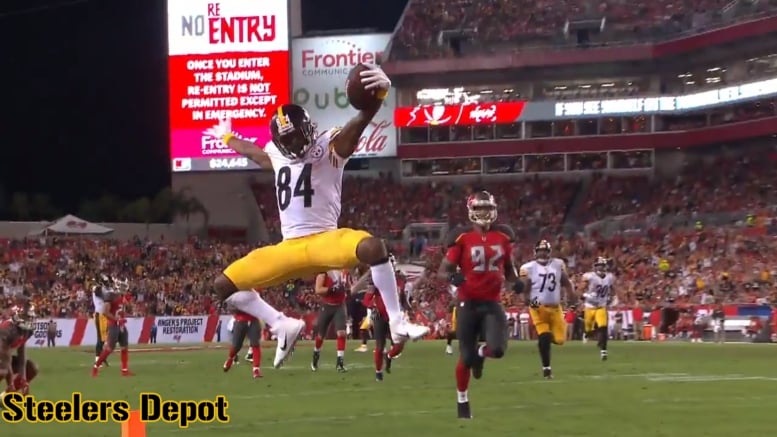 The topic of former Pittsburgh Steelers WR Antonio Brown and his standing as a potential Hall of Fame inductee when he officially calls a career in the NFL has been a heavily debated topic. Dave Bryan and Alex Kozora have mentioned the topic several times on The Terrible Podcast, posing the reality that Brown has been the Steelers most dominant WR in team history, leading the league in most statistical categories for the better half of a decade while in town, seemingly making one impressive play after another look rather routine.

Also, I'm here to jog your memory about this ludicrous catch by Antonio Brown, one of the best in recent times.

As @CollinsworthPFF put it: "I think that is one of the most brilliant plays I've seen in a very long time."

A truly unforgettable win for the #Steelers back in 2017. pic.twitter.com/f3JA6PqO82

However, things have been muddied for Brown in recent seasons, starting with his unceremonious exit from Pittsburgh where he was traded to the Las Vegas Raiders, then was later released by the Raiders after multiple issues popped up before he even took a snap with the team. He landed his butt in the better with the Patriots, looking like a fit made in heaven catching passes from Tom Brady until he was released after playing just one game with the team as the NFL began investigating accusations of rape and sexual assault against him. Still, AB managed to find his way back to Brady, signing with the Buccaneers in 2020 and helped propel their dynamic offense to a Super Bowl title.

Sadly, Brown couldn’t get out of his own way last season as after he suffered an ankle injury, he got into a sideline spat with then HC Bruce Arians about him playing through the injury in the team’s Week 17 matchup against the New York Jets. He ended up taking his pads and shirt off, threw his gloves into the stands, and walked off the field as the Buccaneers were still playing the game.

Antonio Brown has a meltdown at the hand of the #Jets and #BraxtonBerrios pic.twitter.com/RGhSYpyrOu

So, you have the highest of highs with Brown and his accomplishments as a football player, but then you also have the lowest of lows regarding the character off-the-field (as well as running off the sideline). The question remains: is Antonio Brown a Hall of Famer?

Mike Tanier of Football Outsiders recently wrote about the topic, detailing exactly the same problem posed above when having the weigh AB’s success and talent as an NFL WR compared to his transgressions outside the white lines.

“As is often restated here at Walkthrough, voters are forbidden from taking off-field misconduct into consideration when assessing PFHoF cases,” Tanier said regarding Brown’s case for the Hall of Fame. “But voters ARE both allowed and expected to consider whether a candidate upheld the Hall’s stated values of “courage, dedication, vision, fair play, integrity, and excellence” within the realm of their football-related activities.”

From a pure on-the-field perspective, AB should get in. Tanier mentioned Calvin Johnson as another great example of a player that didn’t play a prolonged career in the NFL, but absolutely dominated at his position during the time at which he played as an example many will look to when considering AB’s candidacy for the Hall of Fame. Still, while voters are supposed to evaluate the player, Tanier points to the values the Hall of Fame represents as a potential slipping point for Brown when his name gets brought forward for discussion in the future.

Tanier goes on in his piece to compare Brown’s candidacy to that of current HOF WR Terrell Owens. Owns himself was an immensely talented WR, ranking third in career receiving yards and receiving touchdowns. However, his flamboyant actions off the field rubbed many voters the wrong way in the selection process, causing him not to be a first-ballot selection and having to wait until his third season of eligibility to get voted in. Still, while Owens may have a similar case toward Brown, his on-the-field career production is far better, and his actions off-the-field don’t match the actions Brown has committed in recent seasons.

“Owens retired second on the all-time receiving yardage list and third on the receiving touchdowns list. Brown will retire outside the top 20 in both categories if he fails to play another down of football (which is likely),” Tanier said comparing T.O.’s case to AB’s. “So while examining Owens’ case is informative when discussing Brown, it’s important to remember that Brown faces a tougher climb for two separate reasons.”

Terrell Owens does NOT want to be compared to Antonio Brown ✍️ pic.twitter.com/PCu7c6Q98R

“Brown does not get in on the first few ballots, after fierce debate. Some anti-AB hardliners soften after Julio Jones and some other contemporary receivers are inducted,” Tanier outlined in his proposed timeline for Brown. “After four or five years on the ballot, voters will tire of the constant committee arguments and criticism from the Internet and will try to slide him onto a ballot where he’s unlikely to be the headliner.”

Tanier admits at the end of his piece that he is not a fan of Antonio Brown the person, and while his achievements on-the-field should warrant Hall of Fame honors, his sins off-the-field stain what his presence in the Hall of Fame stands for.

“Therefore, I hope Antonio Brown gets into the Pro Football Hall of Fame on an early ballot. O.J. Simpson’s there, after all. So are Tagliabue, Hornung, and Karras, and lots of guys who showed up for games still drunk or with white powder on their upper lips. Here’s your bust, make your speech, now go find out how much your autograph is worth at card shows.”

Having spoken to Tanier at the Senior Bowl and NFL Combine this year, I have gotten to appreciate his “outside the box” thinking. He is a guy that looks for the interesting story and tries to paint an entire picture which he does successfully in his piece that we outline today.

Personally, I do see Antonio Brown as a Hall of Famer. Like Owens, I would understand why he would get passed up on a first-ballot selection, but I also could make the argument like Calvin Johnson as to why he should get in on the first try based on how dominant he was when he played compared to the rest of the field. This tends to be a touchy subject for some, and I would love to have seen AB play a full career with no issues off-the-field and see how much success he could have had, pushing even the likes of Jerry Rice in the record books based on the pace he was on.

However, that’s not in the cards here in reality. Regardless, despite all his actions off-the-field, I do think that Antonio Brown should be a Hall of Famer once his playing career is officially over.

2022 Offseason Questions: Will Antonio Brown Land In The Hall Of Fame?