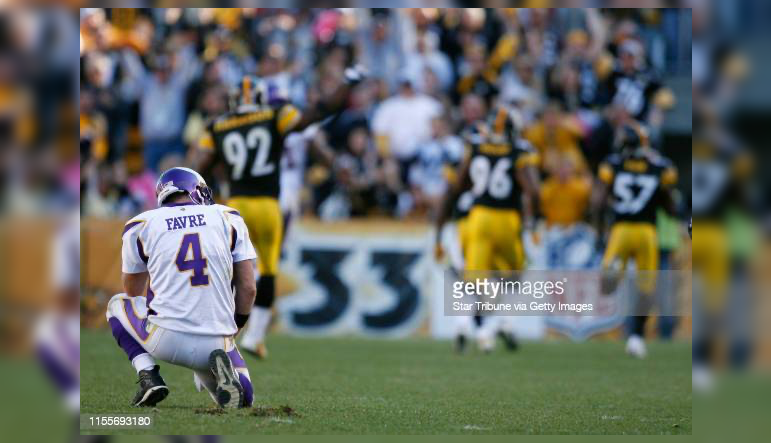 Coming into the Week 7 matchup at Heinz Field on Oct. 25, 2009 between the red-hot Minnesota Vikings and Pittsburgh Steelers, something had to give between two of the top teams in the NFL at that point in the season.

Ahead of the Week 7 matchup, the Steelers were 4-2, while the Vikings were riding a six-game winning streak in the Hall of Fame quarterback Brett Favre’s first season with the Vikings.

Things were really clicking for the Vikings with Favre at the helm and future Hall of Fame running back Adrian Peterson in the backfield. Minnesota ran into the Steelers’ tough defense in 2009 and found out the hard way that they still had a lot of work to do on the offensive side of the football.

Despite racking up nearly 400 yards of total offense in nearly 40 minutes of time of possession, the Vikings’ offense had a really tough time doing anything of substance against the Steelers’ defense. It was tough sledding right away for the Vikings against the Steelers’ defense, going three-and-out on the first two drives of the game, thanks in part to a key sack by standout linebacker James Farrior deep in Minnesota territory.

Pittsburgh’s offense couldn’t get anything going against the Vikings’ defense either, going three-and-out on its first two possessions before the Vikings found some momentum offensively. Favre found Greg Lewis and Percy Harvin for 7 yards each, but following a loss of 3 yards by Peterson off left end, it was Steelers’ outside linebacker James Harrison’s turn to get into the action in the backfield.

On a poorly executed play-action pass that saw outside linebacker LaMarr Woodley left unblocked off the right side of the Vikings’ defense, Harrison raced in around left tackle Bryant McKinnie to track down Favre from behind for the 6-yard loss, eventually leading to a Vikings’ punt.

Building off the momentum of the sack from Harrison, the Steelers’ offense got going on the next drive as quarterback Ben Roethlisberger found Mike Wallace for 10 yards before Wallace then raced around left end on a jet sweep for 13 yards. The Steelers’ drive stalled though due to an offensive pass interference penalty on Heath Miller, and then a sack by Minnesota’s Jimmy Kennedy, forcing the Steelers to settle for a 39-yard field goal from Jeff Reed with nine seconds left in the first quarter for a 3-0 lead.

With the lead, the Steelers’ defense continued to attack. On Minnesota’s next possession the Steelers quickly forced a punt, but the Steelers’ offense then went three-and-out. That gave the Vikings some life overall.

On Minnesota’s next drive, the Vikings found pay dirt. Favre ignited the drive with a 28-yard strike to Harvin down the left sideline, and then found wide receiver Bernard Berrian for 7 and 11 yards, before then finding tight end Visanthe Shianco for 9 yards. Peterson then ripped off a 9-yard run, before capping off the 13-play, 76-yard drive with a 2-yard touchdown run, giving Minnesota a 7-3 with 5:17 left in the first half.

Pittsburgh again struggled to do much of anything offensively, going three-and-out again, but the defense stood tall, forcing a Minnesota punt to give the Steelers’ offense possession once again with 1:46 left in the first half.

Roethlisberger found Santonio Holmes for 14 yards, and then found Heath Miller for 9 yards. Later in the drive, scrambling to his right Roethlisberger found Wallace for 22 yards behind the Minnesota secondary, setting up his outstanding 40-yard strike to Wallace one play later over the outstretched arms of a Minnesota defender for the score with 31 seconds left in the half, giving the Steelers a 10-7 lead heading into the half.

The throw truly was a thing of beauty, and was vintage Roethlisberger at that point in his career. The touch, accuracy and arm strength were all on display here. What a moment.

Coming out of the half, the Steelers went back to work offensively, leaning heavily on running back Rashard Mendenhall. Against a good Vikings’ front, Mendenhall ripped off runs of 16 and 9 yards to open the second half, while Wallace tacked on a 6-yard carry and a 15-yard facemask penalty on Minnesota’s Pat Williams in the process, putting the Steelers deep into Minnesota territory.

A personal foul on Minnesota’s Benny Sapp then gave the Steelers first and goal from the 8 yard line. Pittsburgh couldn’t capitalize in the end, settling for a 27-yard field goal from Reed, giving Pittsburgh a 13-7 lead with 11:09 left in the third quarter.

Minnesota answered with a great drive of their own to open the second half, keyed by a 34-yard completion over the middle from Favre to wide receiver Sidney Rice, giving Minnesota the football at the Steelers’ 1 yard line.

The Steelers defense was up to the task though, putting together a goal line stand as Peterson was stuffed on first down, and Favre threw incomplete on second down to Rice and third down intended for tight end Jim Kleinsasser, forcing the Viking stop settle for an 18-yard field goal from Ryan Longwell with 4:47 left in the third quarter, giving the Steelers a bit of momentum.

Despite the momentum and the energy generated inside Heinz Field due to the goal line stand, the Steelers’ offense went three-and-out, giving the Vikings the football back quickly. Safety Ryan Clark made sure the Vikings’ offense didn’t put together another big drive, blowing up Harvin over the middle on a clean hit on third down, forcing a quick punt.

Three plays after the big hit from Clark and the change in possession, Roethlisberger found Holmes for a thrilling 45-yard catch-and-run against the Vikings’ secondary, putting Pittsburgh at the Vikings’ 9 yard line.

He truly was incredible to watch in the open field with the football in his hands. He just had a knack for making guys miss, and always did a great job setting up his blockers for success downfield.

Unfortunately for the black and gold, the next play resulted in a Mendenhall fumble, giving Minnesota the football right back.

The Vikings seemed to be on the move to take advantage of the turnover as Favre found Rice for 17 yards and seemingly had another big hookup to Rice for 35 yards. A holding penalty on McKinnie wiped out the explosive play though. Still, Favre went back to Rice a few plays later for a 25-yard gain before Peterson ripped off an 11-yard run.

Three plays after Peterson’s run put the Vikings in the red zone, Brett Keisel raced through to swat the ball out of Favre’s hands on third and goal from the Steelers’ 8 yard line, leading to Woodley picking the fumble up and racing home 77 yards for the score behind a convoy of Steelers, turning the game on its head, giving the Steelers a 20-10 lead.

That lead was sadly short-lived though as on the ensuing kickoff Harvin raced home 88 yards for the kickoff return for a score, making it a 20-17 Steelers’ lead with 6:42 left in the fourth quarter.

Pittsburgh desperately needed to put a drive together offensively to give the defense a rest, but a sack by Minnesota’s Asher Allen that caused Roethlisberger to fumble eventually led to a punt as the Steelers caught a break with the ball going out of bounds after the fumble.

Minnesota then took over at its own 26 yard line and began to march. The highlight of the drive was Favre’s dumpoff to Peterson that went 29 yards thanks to an incredible display of power from the MVP running back over Steelers’ defensive back William Gay.

Gay had a great career overall in the black and gold, but that play will live on for a long time as part of Peterson’s highlight package.

Linebacker Keyaron Fox picked up Gay two plays later though, taking advantage of a screen pass gone awry off the hands of backup running back Chester Taylor, racing home 82 yards for the pick-6, putting the final nail in the coffin at 27-17 with just over a minute left in the game.

Fox, primarily a special teams guy, was in the lineup due to injury that day and came up with a massive play. That’s just how things work out in the NFL.

Following Fox’s pick-6, the Vikings mounted one last gasp to try and get back into the game as Favre found Rice for 11 and 16 yards, and Peterson for 17 yards, but Harrison got home on the final snap of the game, sacking Favre for the second time on the day, clinching the thrilling 27-17 win as the Steelers’ defense dominated.

In the win, Farrior led the Steelers with 15 tackles, while Ike Taylor added 10. Harrison finished with two sacks, Farrior added one, Keisel had one, while Fox’s interception stood out as the highlight play, along with Woodley’s fumble return for score.

Though Favre threw for 334 yards on the day, he was sacked four times and had the one interception. Peterson finished with 69 yards and a score on 18 carries on the ground and chipped in with four catches for 60 yards. Rice led the way with 10 catches for 136 yards on the afternoon.

The Steelers went on to finish the 2009 season at 9-7. Following the win over the Vikings, Pittsburgh went into the bye week and then came out in Week 9 with a 28-10 win over the Denver Broncos on the road. After that though, Pittsburgh lost five straight games, including two overtime games in a row to the Kansas City Chiefs and Baltimore Ravens, to fall to 6-7. The Steelers rallied to win their final three games, but missed out on the playoffs.

Minnesota, on the other hand, reeled off four straight wins after the loss to the Steelers, eventually finishing the season 12-4 under head coach Brad Childress, winning the NFC North. Minnesota then defeated the Cowboys in the divisional round, 34-3, but lost in the NFC Championship Game to the New Orleans Saints, 31-28.