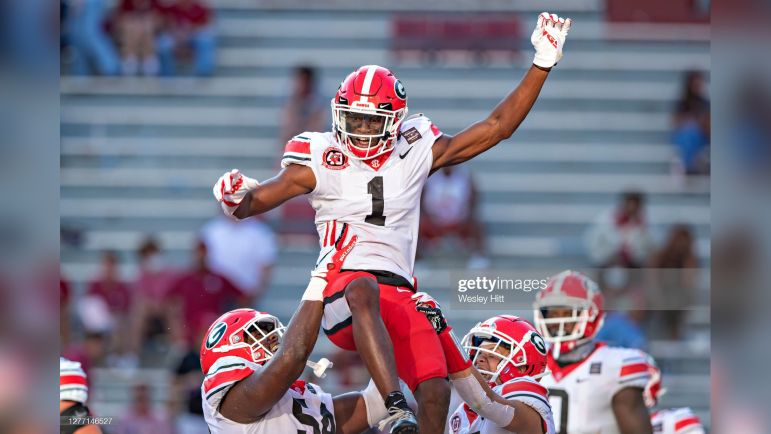 While recently listening to a recent edition of the Fantasy Football Today in 5 podcast with Adam Aizer and Jacob Gibbs, the two highlighted the topic of new Tennessee Titans WR Treylon Burks and if fantasy managers could expect him to be the Titans best WR in 2022.

Gibbs, who does data and analytics work for CBS Fantasy and SportsLine, dove into Burks and the success he had on the most run routes in an NFL passing game. Despite this being a podcast about the Tennessee Titans WR, Gibbs threw in a little nugget that Pittsburgh Steelers fans should be excited about their most recent WR addition via the 2022 NFL Draft.

“The routes that are used the most in the NFL are go routes, hitch routes, out routes, and crossing routes, and on those routes of the big four, Treylon Burks saw his yards-per-route-run rate rise by 44% compared to all the other routes that he ran,” said Gibbs. “The only other players with a higher discrepancy on the Big Four Routes in this year’s class are George Pickens and Drake London.”

Gibbs didn’t say whether Pickens ranked first or second in the discrepancy in yards-per-route-run on the most common NFL routes when compared to London, but the fat that Pickens is in the top two in this category is an encouraging sign since Pittsburgh was able to nab Pickens with the 52nd overall selection in the second round of the 2022 NFL Draft. For context, ten WRs went ahead of Pickens in the 2022 NFL Draft, six of them going in the first round. Pickens was widely considered to be one of, if not the top WR prospect heading into the spring last year for this draft class, but a torn ACL during spring ball caused him to miss a majority of the 2021 season.

George Pickens is the ROOKIE WR1 in this class.

Don’t be confused by all the noise out there. 😤

Still, Pickens managed to battle back to play in Georgia’s final game of the season and contribute during the stretch of the CFP Playoffs, including an impressive diving catch attempt in the National Championship Game where the team beat Alabama for the title.

Many here at Steelers Depot, as well as outside in the media and NFL circles wonder if Pickens would have been WR1 in this draft class had he have not gotten injured last spring. Given his experience and effectiveness on the most commonly run NFL routes (which is also backed by a study conducted here at Steelers Depot), the argument could have been made that Pickens’ game best translates to the league despite his overall lack of experience.

Pickens will likely be slotted behind Diontae Johnson and Chase Claypool at minimum when training camp opens while battling with the likes of Anthony Miller and possibly Miles Boykin to see the field immediately in three WR sets. Still, given his talent profile and success on NFL route concepts despite his overall lack of college receptions and play time at Georgia coming off the knee injury, one would imagine that Pickens should see the field sooner rather than later and be able to make a notable impact in the passing game for Pittsburgh once he gets up to speed.

He may have been the tenth WR taken in 2022, but the tape and the data suggest that Pickens could be right there with London as a receiver that could have received WR1 consideration in this draft class if it weren’t for injury.